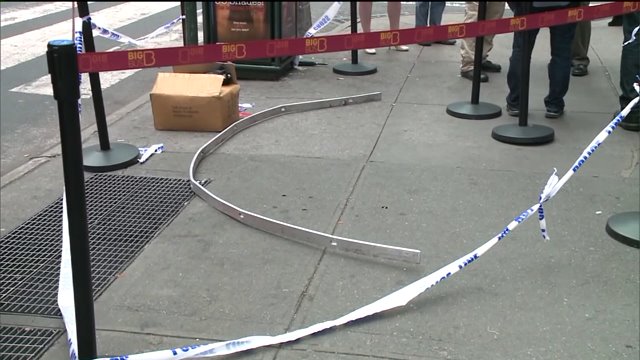 The 10-foot-long, 1/2-inch deep aluminum aluminum bracket tumbled at least 15 stories from a billboard under construction above the M&M World sign at 1600 Broadway.

TIMES SQUARE (PIX11) - Two people were hurt Wednesday morning when a large, metal piece of a sign fell from a Times Square building.

The 10-foot-long, 1/2-inch deep aluminum aluminum bracket tumbled between 10 and 11 stories from a billboard under construction above the M&M World sign at 1600 Broadway.

The falling debris left one man with a minor injury, but, according to witnesses, the other man was thrown to the ground after being hit in the shoulder.

Both injured men are workers for the Big B Bus tour company -- they were taken to Bellevue in stable condition, according to EMS.

The aluminum section is estimated to weigh roughly 20 pounds.

"We were lucky it was an aluminum piece and not a steel piece," said a person close to the accident investigation.

"M&M’S World is aware that two pedestrians were injured today after a piece of metal fell on them outside of the building where the Times Square store is located," a spokesperson for M&M's World told PIX11 in a statement. "

This incident is unrelated to the store. The store is a tenant of the building. Our thoughts are with the injured individuals."

Work on the sign was contracted by the owners of 1600 Broadway.