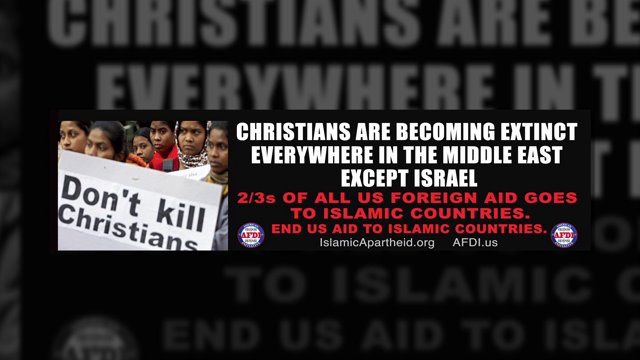 Ad campaigns by the American Freedom Defense Initiative and its President Pamela Geller will be littering our city buses yet again.

NEW YORK (PIX11) -- Ad campaigns by the American Freedom Defense Initiative and its President Pamela Geller will be littering our city buses yet again.

"They can print it and the courts will uphold it but the people will not embrace it," said Dominick Miller.

Six ads in total will be going up.

The MTA in the meantime can do nothing about the ads, though they did try a few years ago. The ads, however, are protected under the First Amendment.

"Ms. Geller just practices hate. [She] doesn't understand that one can be supportive of a cause without stepping over the line," said NYC Comptroller Scott Stringer.

Pamela Geller, who is behind the ads, has been called a figurehead in the anti-Muslim movement. She has been unapologetic in the past and continues to be so.

The concerns of political, community and religious leaders today is the uptick in hate crimes against both Jews and Muslims living here in New York City.

Since July alone, we are up to 14 hate crime attacks.

"We find these ads disgusting. They are clearly meant as attempt to divide New Yorkers," said Mark Levine. "They're an attempt to slander all Muslims."

Geller is seemingly not concerned with any potential impact her ads may have on that statistic.

"I think that's a ridiculous premise. I think it's a distraction from the real problem," Geller said. "I wish these Muslim leaders would react with the same vim and vigor when hundreds of girls are kidnapped by Boko Haram."

"These ads incite violence against Muslims and Jews and we are standing here to say there is no room for hate in NYC," said Linda Sarsour of the Arab American Association of NY.