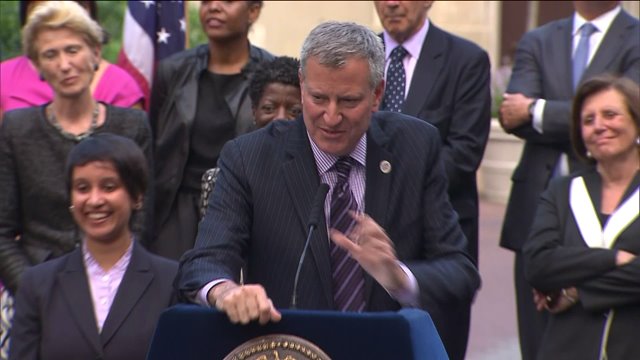 Contrasting scenes of wealth is nothing new. However, the fact that financial inequality in NYC is the highest in the nation is new, according to a New York Times report citing U.S. Census Bureau stats from 2012 to 2013.

"It's an unacceptable state of affairs," de Blasio said on Thursday.

Mayor de Blasio says that he and the city council are pushing agendas such as Pre-K, after school programs and minimum wage to help create added financial savings for those New Yorkers who need it.

However, de Blasio also points the finger at Washington D.C. to take part of the blame: "the big missing link here is that we need a federal government committed to addressing inequality. We don't have it now."

The one area where income disparity is most prevalent and where most money is spent by working families each month is real estate,"I've seen the boom and experienced busts and experienced booms again," said Stephen Sunderland, the Senior Managing Director and owner of Optimum Spaces.

Sunderland has been dealing in commercial real estate for 30 years.  According to him, construction standards are what fuels the disparity, "The rules that we have in place make it virtually impossible to produce affordable housing on scale."

Although the report cites statistics prior to Mayor De Blasio ascent at City Hall, Political Strategist Basil Smikle says it will have an impact on his administration:"Definitely a wake-up call for the Mayor."

And the reason for this, according to Smikle, is simple, "There is not that much that we've seen from the Mayor that will concretely reduce or certainly put an end to the inequality that we are seeing here in Manhattan and the thing is residents feel it and they felt it for quite sometime."