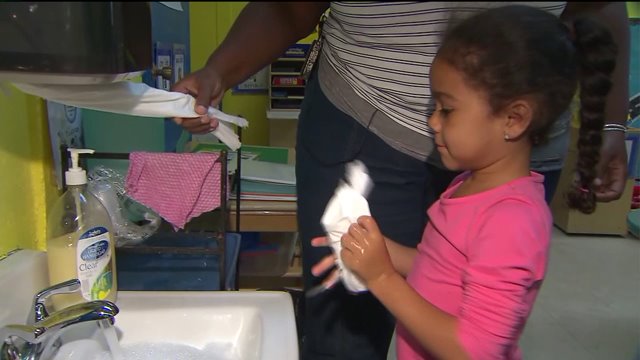 Since enterovirus D68 has hit the Tri-State area, schools are being more strict about hygiene policies for their students.

(PIX11) -- Teachers and parents have every right to be concerned, but they shouldn't panic.

That’s the message we heard during our Thursday afternoon visits to two New York City pre-schools -- and phone calls to many others about the strategy to slow the spread of Enterovirus-D68.

What we saw was a lot of hand washing among the little ones and the adults.

Transmission is rampant among children, health officials say, because kids are kids: hands in the mouth, hand up the nose, hands on the toys ... you get the idea.

Which is why one teacher at the Dawning Village Pre-School in East Harlem is so strict about enforcing the school’s hygiene policy -- in the worst cases, what starts out as a common cold can lead to a serious respiratory illness. Especially in children with asthma.

So far, there’s only one confirmed case of D-68 in New York City, another in Connecticut, New Jersey, and Long Island.

Across town at the Montclare School on the Upper West Side, Jenny Bruce says the “good hygiene habits” should have always been in place even before D-68 began its cross country trek from the Midwest to the Big Apple.

“We did send out a memo to our parents, letting them know the latest information on the DOH and CDC websites. If you notice that your child doesn’t feel well, or isn’t their normal self, if you can, keep them home,” said Bruce.