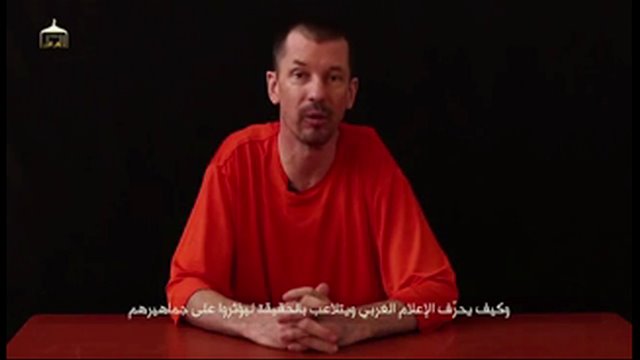 The Islamic State group has released a video showing a British man who identifies himself as a journalist and says he is a prisoner of the extremists.

BEIRUT (AP) — The Islamic State group has released a video showing a British man who identifies himself as a journalist and says he is a prisoner of the extremists.

In a slick video shot with three cameras, the man identifies himself as John Cantlie, a photojournalist who worked for publications including The Sunday Times, The Sun and The Sunday Telegraph.

He says he came to Syria in November 2012 and was subsequently captured by the Islamic State group.

The group has beheaded two U.S. journalists and a British aid worker, and threatened to kill another British hostage. Cantlie's name has not been mentioned among foreign hostages held by the group before, apparently because of a media blackout.

The British government declined to comment on the video.

"Hello, my name is John Cantlie. I'm a British journalist who used to work for some of the bigger newspapers and magazines in the U.K. including The Sunday Times, The Sun and The Sunday Telegraph.

In November 2012, I came to Syria where I was subsequently captured by the Islamic State. Now nearly two years later many things have changed, including the expansion of the Islamic State to include large areas of eastern Syria and western Iraq -- a landmass bigger than Britain and many other nations.

Now I know what you're thinking, you're thinking he's only doing this because he's a prisoner. He's got a gun at his head and he's being forced to do this, right?

Well it's true I am a prisoner that I cannot deny but seeing as I've been abandoned by my government and my fate now lies in the hands of Islamic State I have nothing to lose.

Maybe I will live and maybe I will die, but I want to take this opportunity to convey some facts that you can verify. Facts that if you contemplate might help preserving lives.

Over the next few programs, I'm going to show you the truth as the western media tries to drag the public back to the abyss of another war with the Islamic State.

After two disastrous and hugely unpopular wars in Afghanistan and Iraq, why is it that our governments appear so keen to get involved in yet another unwinnable conflict?

I'm going to show you the truth behind these systems and motivation of the Islamic State, and how the western media, the very organization I used to work for, can twist and manipulate that truth to the public back home.

There are two sides to every story – think you're getting the whole picture? And I'll show you the truth behind what happened when many European citizens were imprisoned and later released by the Islamic State and how the British and American governments thought they could do it differently to every other European country.

They negotiated with the Islamic state and got their people home, while the British and Americans were left behind.

It's very alarming to see where this is all headed and it looks like history repeating itself yet again. There is time to change this seemingly inevitable sequence of events, but only if you, the public act now. Join me for the next few programs and I think you may be surprised by what you learn."