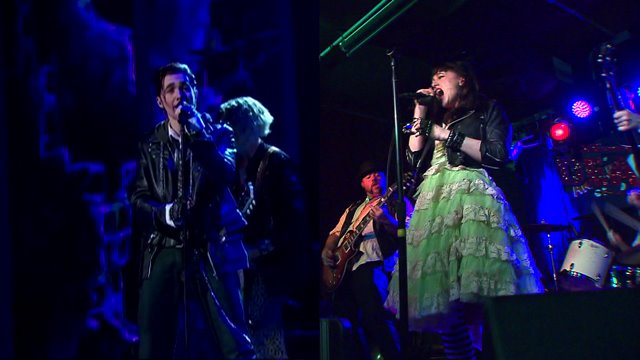 In this week`s Backstage on Broadway, we meet Lena Hall from Hedwig and the Angry Inch. Her role on stage may shock you but her real thrill comes from a different type of performance,

She's a woman playing a man who wants to be a woman.

Lena Hall is Yitzhak, the loyal sidekick in the award-winning musical "Hedwig and the Angry Inch."

“My main goal was to trick the audience into actually thinking I’m a man,” Hall said.  “That’s why there’s no pictures in the the playbill because I didn’t want people to see my face and then look for me.”

A tricky transformation she makes all by herself.

Lena's Broadway career started in 1999 in the the musical "Cats."

She went on to appear in shows like 42nd Street, Dracula and Tarzan.

“After I did Tarzan, I actually quit the business for a little while," Hall explained. "It was this weird thing, I was like I’m on Broadway, and I should be happy, but it’s not connecting and I don’t know why.”

After a five-year break, she came back as Nicole in Kinky Boots.

“I wanted to be known as a singer and I wanted to work on my voice," Hall said. "I wanted to just be seen as more of a leading character.”

Then Hedwig came calling, a role that earned her a Tony Award for Best Featured Actress in a Musical.

I went down to Arlene's Grocery Bar and Music Venue to see for myself.

“I needed some kind of an outlet to express myself and have my own control over my own project,” Hall explained.

After connecting over MySpace, so she joined a group of guys from Long Island, to form "The Deafening."

“They were like well she’s pretty and she can sing, so you’re in the band and I was like great!" Hall said. "I love rock n roll, I grew up with rock n roll but I didn’t sing it really and so through the years I really pushed myself and then all of a sudden it clicked in and this really high, dirty voice came out.”

A voice that has garnered lots of fans.

“They're amazing!" Watt, a devoted fan, said. "They’re really bringing rock 'n' roll back to where it should be at this point and Lena Hall is like this superstar.”

For Lena, the band has meant more than she every thought.

"[It] was what really catapulted me into who I am now as a performer on Broadway,” Hall said.

No matter what stage Lena Hall is on- she rocks!

Related: Backstage on Broadway: New 'Hedwig' star, Taye Diggs, talks loving his heels, raising his son and making the role his own