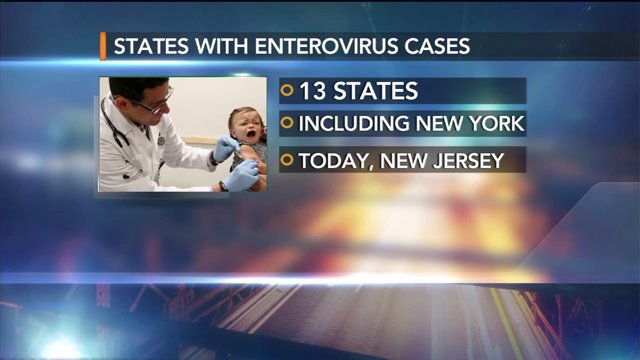 The upper respiratory disease that has sickened more than 1,000 children across the midwest made its way to the Tri-State area.

HEMPSTEAD, Long Island (PIX11) - Yet another case of the enterovirus D68 has been confirmed -- this time on Long Island.

The school-aged patient is from North Hempstead and is now recovering after treatment at a local hospital, according to the Nassau County Health Department.

"The Health Department has confirmed one case of enterovirus 68 (EV-D68) in a child from New York City. EV-D68 usually causes common cold symptoms, although it can cause severe respiratory illness, especially in children. We have been monitoring hospital admissions to detect changes in the number of children admitted for respiratory illness, asthma, and influenza-like illness. Other more common respiratory viruses are also currently circulating, which are normally present this time of year, including influenza. We remind New Yorkers that the best way to prevent the spread of many infectious diseases is through frequent and thorough hand washing, and parents with concerns should consult their child's doctor."