LI teen, now behind bars, learns that Yik Yak is not anonymous after all 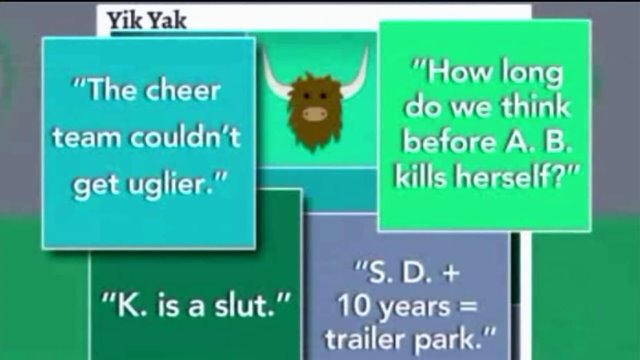 A 15-year-old has been arrested after allegedly saying there would be a shooting and bombing at his Long Island high school, police said Tuesday.

MOUNT SINAI, Long Island (PIX11) -- He thought he was anonymous when he threatened to blow up his school and shoot at fellow students, but the 15 year-old freshman instead spent Tuesday behind bars, after learning the hard way that nobody on the Internet is truly incognito.

The student used the social media app called Yik Yak to announce his plans to do harm to some of the approximately 900 students at his school, Mt. Sinai High.

On Tuesday, on the campus that the high school shares with the town's middle- and elementary schools, at least three Suffolk County police cruisers were assigned to all day duty, just in case the student's plot were to be carried out by copycat criminals.

"I think it was just a joke," said Dakota Caruso, an 11th grader, about the messages. "I think he was just joking and he took it too far and he got in trouble for it."

"It was very shocking," said another student, who did not give her name, "to know that a kid, especially a freshman, did it."

Yik Yak is an app that promotes itself as being "an anonymous social wall," or bulletin board, on which members can post messages regarding "anything and everything."

In the case of Mt. Sinai High School, the anything and everything was the threat of the bomb attack and shooting that the assumedly anonymous texter claimed would take place on September 16th.

He certainly did not, according to Suffolk County Police. In a statement, the department pointed out that its detectives were able to quickly track down the teenage Yik Yakker after students and parents, who saw the harmful messages Monday after school, alerted investigators.

They arrested the boy on a felony charge of making a terrorist threat, which is punishable by prison time if the teen is found guilty. Also, the school called and sent letters of warning home to families Monday evening, just in case.

"It's because of a stupid app," said Ashley Perez, who's also an 11th grader. "Everyone just writes dumb things on it."

Some of those dumb things, since the app has gained popularity this year, have been strongly hateful messages, presumably sent because the writers assume nobody will ever know who posted them. The Mt. Sinai High School case is reason to reconsider that assumption.