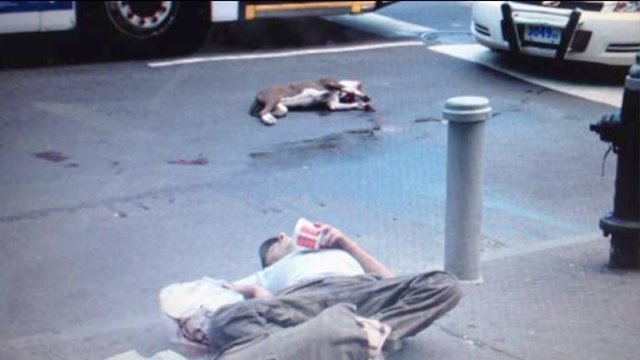 The NYPD officer shot the pit bull after it pounced on him in the East Village.

NEW YORK (PIX11) -- It’s the video that’s hard to watch for just about anyone. On August 13, 2012, a pit bull named Star was left scrambling after its owner, a homeless man, suffered a seizure on an East Village sidewalk.

Confused, the pit lunged at an NYPD officer and was shot in the face. The shocking and disturbing incident was captured on video and splashed across the YouTube.

In what could be best described as an incredible recovery, Star fought for survival eventually resurfacing 1,500 miles away from the New York in Nebraska.

She got there after native-New Yorker Charlie Cifarelli adopted her, following tireless months of legwork.

“I watched the dog get shot. I was like a kid, I saw the video over and over again,” Cifarelli told PIX11 News in a phone interview Tuesday.

“I was traumatized man, I’m not faint of heart but it just rocked me.”

The same images that shocked many, motivated Cifarelli. After jumping through countless hoops and red tape with the city’s Animal Care and Control, he finally got some results when the Mayor’s Alliance set up a date between Cifarelli and Star at the National Greyhound Adoption Program in Pennsylvania.

“I was finally meeting this dog that was described as a Tyrannosaurus-Rex,” he recalled. “The dog was friendly. The dog was actually pretty shy.”

The meeting which happened in December of 2012 wasn’t their last. Weeks later, Star went up for adoption and Cifarelli – although hesitant at first – took action.

“I rented a minivan, the first and only time in my life. I drove all the way from Nebraska to Philadelphia and picked up Star and she became a part of our family.”

The one thing Cifarelli hopes people take from his story he said, “Don’t have an off button.”

“These kids that are growing up today need to know if they see something that they don’t like, they need to do something about it and they need to follow through.”

For more on Star and her road to recovery, visit her Facebook page.