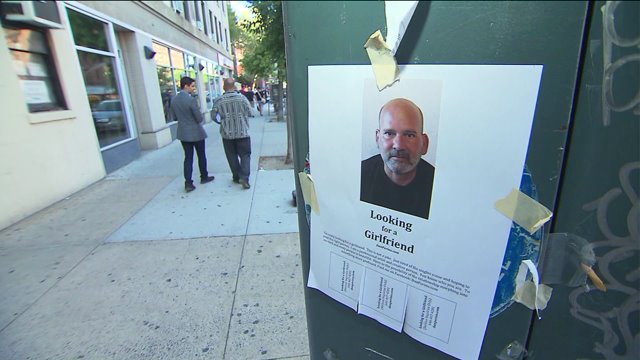 An NYC artist is posting fliers across the city calling for a girlfriend -- and it appears to be working.

NEW YORK (PIX11) – An NYC artist is posting thousands fliers across the city calling for a girlfriend -- and it appears to be working.

Armed with a thick stack of fliers bearing his face and a roll of masking tape, Dan Perino tacks up his ads wherever he can. He’s posted 15,000 fliers so far.

Perino said it’s worth every penny to fulfill the goal he came up with on a whim.

“One day, I just woke up and thought, ‘I’m going to post fliers looking for a girlfriend,’” he said.

“She doesn’t have to be a raging beauty,” he said.

But she does have to want children. Perino has been married before and has a child, but he wants another.

He’s gone on 65 dates so far and while none have proved to be “the one,” he’s holding out hope.

And it’s not entirely misguided, according to one expert.

The unconventional search for love isn’t all rosy, though.

Posting fliers on public property comes with a $75 fine, according to the Department of Sanitation.

PIX11 News asked the city if they would penalize Perino and a spokesperson said if they see a flier on public property, they will take it down and fine the poster. But it looks like New Yorkers are pulling down Perino’s fliers before the Sanitation Department can get to them.