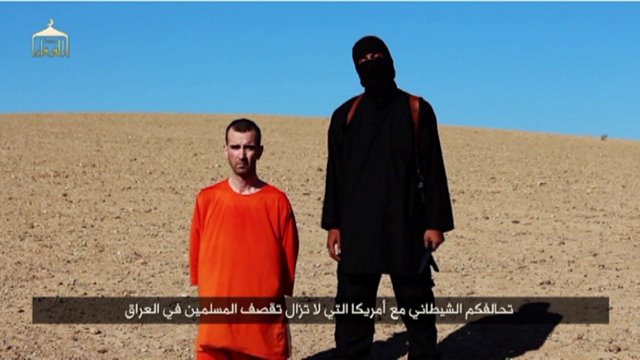 Haines third Western captive to be killed by the Islamist extremist group in recent weeks.

(CNN) -- The killing of British aid worker David Haines "will not lead Britain to shirk our responsibility" to work with allies to take on ISIS, British Prime Minister David Cameron said Sunday.

Instead, he said, "it must strengthen our resolve."

Speaking a day after the Islamic terror group posted a video showing Haines' beheading -- the latest in a string of such videos -- Cameron vowed to work with the United States to support its "direct military action." He also emphasized that "this is not about British troops on the ground."

"We have to confront this menace," Cameron said. "Step by step we must drive back, dismantle, and ultimately destroy ISIL and what it stands for." Together with allies, he said, "we will do so in a calm, deliberate way but with an iron determination."

The group, which calls itself the Islamic State, is also known as ISIS and ISIL.

"This organization poses a massive threat to the entire Middle East," Cameron said, making a public statement before an emergency meeting of security and intelligence officials.

The European Union joined Cameron in condemning Haines' "atrocious murder" and said it was committed to fighting terror.

"Together with international and regional partners, the EU will spare no effort to ensure that an end is put to this atrocious terrorist campaign and all perpetrators are held accountable," the EU statement said.

Cameron listed five points in the British strategy: to work with the Iraqi government and Kurdish regional governments and help them protect minorities being slaughtered by ISIS; to work at the United Nations "to mobilize the broadest possible support" against ISIS; to contribute to U.S.-led military action; to assist in humanitarian efforts; and to "reinforce our formidable counterterrorist effort here at home."

Some British Muslims have joined ISIS, and the militant who killed Haines and two Americans -- James Foley and Steven Sotloff -- may be British.

'Not Muslim, but monsters'

The video of Haines' killing looks very similar to those that showed the beheadings of Foley and Sotloff, and the masked militant sounds like the same man.

"It falls to the government and to each and every one of us to drain this poison from our society and to take on this warped ideology that is radicalizing some of our young people," Cameron said.

"Islam is a religion of peace," Cameron insisted, saying of the ISIS militants, "They are not Muslim, they are monsters."

Britons "need to know that this is a fanatical organization" that plans attacks across Europe and in the UK, Cameron said.

"It was an ISIL fanatic who gunned down four people in a museum in Brussels," he said referring to Mehdi Nemmouche, a Frenchman from Roubaix in northern France, accused of killing four people at the Jewish Museum of Belgium in May.

Nemmouche recently spent a year in Syria and is a radicalized Islamist, the chief prosecutor of Paris said in June. French journalist Nicolas Henin said last month that Nemmouche tortured prisoners he guarded while fighting for ISIS in Syria.

"He did beat me a number of times. I don't know of any bad treatment to any other foreign hostages coming from him specifically but I witnessed him torturing local prisoners."

'Your evil alliance with America'

The video of Haines' death shows a masked ISIS militant placing his hand on another captive, whom he identified as Alan Henning, a British citizen.

On Sunday, Henning's family distributed an image of him holding a child at a refugee camp on the Syria-Turkey border. The family asked media to use this image rather than the one of Henning in an orange jumpsuit kneeling beside his captor.

ISIS which controls large areas of northern Syria and Iraq, previously publicized grisly videos of the beheadings of American journalists Foley and Sotloff. It has also brutally slaughtered large numbers of Syrians and Iraqis in the territory it's seized.

In the two previous videos, the killer directed his comments at the United States, which had begun airstrikes against ISIS in Iraq. But the latest one singles out Britain.

"Your evil alliance with America, which continues to strike the Muslims of Iraq and most recently bombed the Haditha Dam, will only accelerate your destruction and claim the role of the obedient lap dog," says the militant.

The United States launched airstrikes on ISIS positions near Haditha Dam in western Iraq a week ago and is working to build a coalition of countries to support its efforts to combat the terrorist group.

"Cameron will only drag you and your people into another bloody and unwinnable war," says the killer, dressed all in black with only his eyes and hands showing. He calls the beheading "a message to the allies of America."

Like them, Haines appears kneeling beside the executioner in a barren desert landscape, dressed in a bright orange jumpsuit. He had been shown briefly in the earlier video of Sotloff's killing.

Haines, 44, went to Syria to help organize the delivery of humanitarian aid to a refugee camp in Atmeh, close to the Turkish border. He was abducted near the camp in March 2013.

"David was most alive and enthusiastic in his humanitarian roles," his brother, Mike, said in a statement. "His joy and anticipation for the work he went to do in Syria is for myself and family the most important element of this whole sad affair."

Before becoming an aid worker, Haines worked for the Royal Mail. He was an aircraft engineer with the Royal Air Force before he went to work with ScotRail, a Scottish train company, his brother said. A stint with the U.N. in the Balkans would change Haines' life path.

"There are many accolades from people in that region that David helped. He helped whoever needed help, regardless of race, creed or religion," his brother wrote. "During this time David began to decide that humanitarian work was the field he wanted to work in."

His brother also described Haines as an ordinary man -- "just another bloke" -- who grew up with strong family values that he carried into adulthood.

"David was a good brother, there when I needed him and absent when I didn't. I hope that he felt the same way about me. He was, in the right mood, the life and soul of the party and on other times the most stubborn irritating pain in the ass. He would probably say the same about me," Mike Haines wrote.

David Haines had more than a decade of experience doing aid work, helping victims of conflict in the Balkans, Africa and the Middle East.

He was in Syria as a logistics and security manager for ACTED, a French aid group that was helping to provide food, tents and water for tens of thousands of people who had fled to the Atmeh camp amid the vicious civil war.

When he wasn't working in troubled areas, Haines lived in Croatia with his wife, Dragana, and their 4-year-old daughter, Athea.

He grew up in Scotland, and his first marriage was to his childhood sweetheart Louise, according to his brother.

His teenage daughter from that marriage, Bethany, talked about how much she misses her father in comments on a social network, Ask.fm, late last year.

Asked what she wanted at that time, Bethany replied simply, "For my daddy to come home."

The British government said earlier this month that it had attempted to rescue one of its citizens held by ISIS "some time ago" but had failed. It didn't provide any further details.

U.S. President Barack Obama, who announced last week that U.S. airstrikes would go after ISIS in Syria, condemned "the barbaric murder" of Haines.

"The United States stands shoulder-to-shoulder tonight with our close friend and ally in grief and resolve," he said in a statement late Saturday.

The murderous, meteoric rise of ISIS has caused alarm across the Middle East and beyond.

"David Haines went out to the region to help the people of the region," said Shuja Shafi, the council's secretary general. "That extremists chose to murder him only shows once again the depravity of their warped ideology."

ISIS members "claim to be acting in the name of Islam," Shafi said. "But there is nothing in our faith that condones such behavior."

In his statement, Obama reiterated his intention "to degrade and destroy this threat to the people of our countries, the region and the world."

U.S. Secretary of State John Kerry has spent recent days in the Middle East trying to build support for the U.S. strategy to combat ISIS.

Those efforts are expected to continue Monday in Paris, where France is hosting an international conference on the crisis in Iraq.

Countries in the Mideast and outside the region "are prepared to engage in military assistance, in actual strikes if that is what it requires" to fight ISIS, Kerry told CBS' "Face the Nation" on Sunday.

Some nations "are clearly prepared to take action in the air alongside the United States and to do airstrikes if that's what they're called on to do," he said. Some nations have offered to put troops on the ground, "but we're not looking for that at this moment anyway," Kerry added.

Australia is preparing to deploy as many as 10 planes, most of them combat aircraft, to the United Arab Emirates in response to a U.S. request to contribute to the coalition, Australian Prime Minister Tony Abbott said Sunday.

It will also put together a team of special operations personnel who could act as military advisers to Iraqi forces and others fighting ISIS, Abbott said in a statement.

"We are not deploying combat troops but contributing to international efforts to prevent the humanitarian crisis from deepening," he said.

In a Sunday interview, White House chief of staff Denis McDonough declined to say if any members of the emerging coalition would put troops on the ground, but he said that there will be a focus on training Syrian rebels and Iraqi and Kurdish fighters to take on ISIS with coalition backing.

That backing will come in the form of airpower, intelligence, reconnaissance, surveillance and training, he told CNN's "State of the Union," and it will be especially important to draw Sunni fighters into the battle.

Asked if American involvement could make things worse, given the nature of ISIS threats against the West, McDonough said that with Haines' execution came a reminder that ISIS is inhumane, barbaric and depraved.

"The thought we could make them more so is faulty," he said.