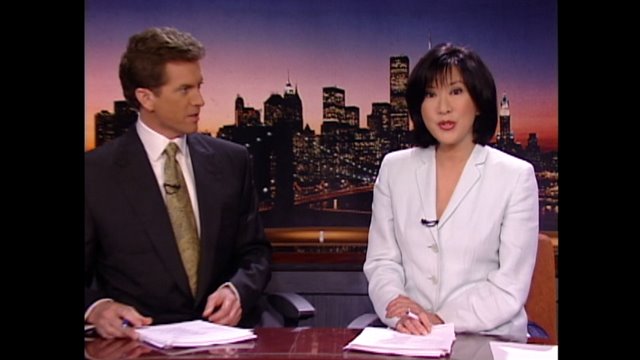 This is the first 10 minutes of the WB 11 News at 10 from the night before the attacks that destroyed the World Trade Center.

The Twin Towers were brutally erased from the New York skyline 13 years ago Thursday, but their visual legacy defiantly survives on the streets of New York City, turning up in the most unexpected places.

Their famous silhouette can still be found in logos and signs for businesses and government and transportation agencies across the city — there’s the dry cleaner on the Upper West Side, the unisex hair salon in Park Slope, the movie theater on the Upper West Side, the diner in midtown Manhattan, the Manhattaville MTA bus depot, the truck for a demolition business. One sign, for Los Mellos barber shop in Brooklyn, is particularly touching.  The sign proudly displays the words “The Twins,” and prominently features the Twin Towers.

Rolando Pujol, WPIX's executive producer for digital, has been photographing these signs for years.

He wrote for amNewYork in 2011: "These images of the Twin Towers — a neon window silhouette here, a graphic on a delivery truck there — can be considered collectively as a quiet yet powerful citywide memorial."

All around New York, they remain --  signs that 13 years on would have been easily replaceable but now serve as proud testaments to another New York, a New York that was forever changed in 102 minutes of terror on a Tuesday morning in September.