Backstage on Broadway: ‘Ruthless! The Musical’ returns to New York to benefit BC/EFA 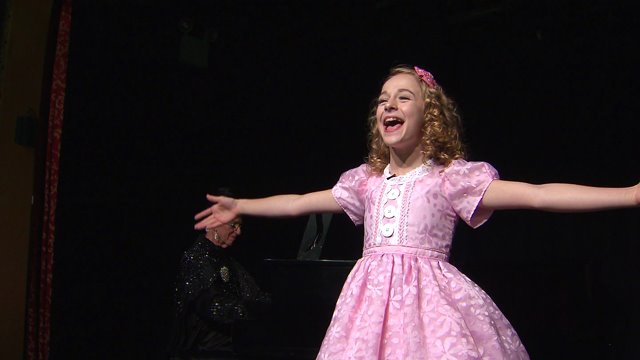 In this week`s Backstage on Broadway, we meet the stars of the off-broadway hit musical-comedy "Ruthless!" It`s returning to New York for a limited time and has a new leading lady.

She sings, she dances and she kills.

“Everyone wants to play this little girl because she gets to curse and she gets to murder,” Joel Paley, the show's author and director, said.

Joel Paley and his partner, Marvin Laird, created this show more than 20 years ago.

RELATED: Ruthless! co-creator explains the origins of the play

“It’s taken me many years to realize how much about my life it is," Paley explained. "And how my mother is every one of these characters.”

"Its real roots are in satire," Marvin Laird, the show's original composer, said. "We satirize many iconic pieces.”

“There is a message that has to do with what can happen when ego takes over and when ego runs wild," Laird explained. "[And] when there’s no morality or ethical issues grounding a person.”

Ruthless! first hit the the stage in 1992, starring a then-Broadway newcomer Laura Bell Bundy. A role understudied by Britney Spears and Natalie Portman.

Now there's a new girl in town. Her name is Sophia Anne Caruso.

“It’s a tough character," Caruso said. "But that’s what I like about it, it’s a challenge.”

Her role as Tina has been three years in the making.

“I did a production in my hometown in Washington," Caruso explained. "[But] I never got to bring it to the stage because our lead actor he passed away."

But, Sophia did was she needed to do to play the part.

"I sent Joel, Marvin and Maxine a letter,”  Caruso said.

“She said it was the worst thing that ever happened in her life, and she doesn’t know if she’ll ever get over it," Paley remembered. "But in the meantime, I know all the songs, all the lines, so if you ever do Ruthless again, I’m your girl and I said get this kid, she is Tina and when I met her, she was!”

You can catch these performances at Stage 72 at the Triad Theater.

The shows are limited and are providing more than just laughs, they're helping those in need.

"I got a call from Marvin and Joel a couple months ago saying they wanted to bring the show back to New York," Danny Whitman, director of Communications for Broadway Cares/Equity Fights Aids, said. "They wanted to include Broadway Cares as a beneficiary of a portion of the proceeds, which we were thrilled about!”

"It is absolutely an exciting personal experience and we’re just having the time of our life just experiencing this experience," Paley said.