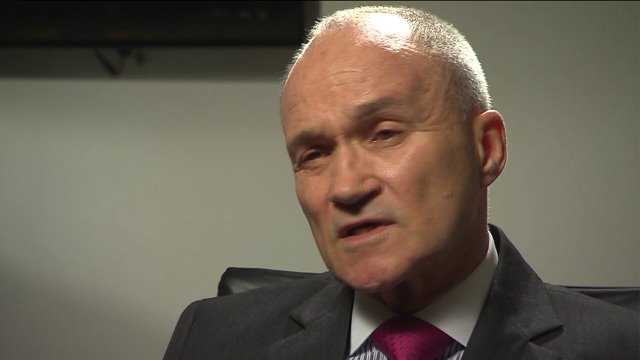 As President Obama prepared to address the nation about combating ISIS jihadists overseas, the former NYPD Commissioner who led the department for 12 years, post 9/11, told PIX 11 News he felt "vindicated" that many of his counter-terrorism programs at Police Headquarters remain.

NEW YORK (PIX11) -- As President Obama prepared to address the nation about combating ISIS jihadists overseas, the former NYPD Commissioner who led the department for 12 years, post 9/11, told PIX 11 News he felt “vindicated” that many of his counter-terrorism programs at Police Headquarters remain.

“I know the current administration had talked  about changing a lot of things,” Raymond Kelly told PIX 11 News.  “Thank God very little has changed.  They kept the counter-terrorism regimen in place.”

Kelly was speaking from his offices on Sixth Avenue in Manhattan.  He is now President of Risk Management Services for Cushman and Wakefield, a prominent, commercial real estate firm.

When PIX 11 News asked Kelly if the policies under current Police Commissioner, William Bratton, and his deputy for counter-terrorism, John Miller, were similar to his, Kelly replied, “It’s exactly the same thing—with minor changes—and that’s good.”  When we asked Kelly if he felt vindicated that most of his program was kept intact, he replied, “Yes.”

Kelly has often pointed out that sixteen terror plots were foiled during his tenure at Police Headquarters.  He said some of that was due to luck, but much of it was due to good intelligence gathering.

When PIX 11 mentioned the controversy over the monitoring of mosques and certain Muslim businesses, asking if he would change anything, Kelly said, “No, not at all.  You could always do something different.  Certainly not the big decisions.  The proof is in the pudding.”

“The first World Trade Center bombing should have been a huge ‘wake-up’ call for the city and the country,” Kelly told PIX 11 News.  “We learned our lesson the hard way.”

More than eight years after the first, World Trade Center attack, Al Qaeda terrorists hijacked four planes, two of them crashing into the Twin Towers downtown, taking them down on September 11, 2001.

“It certainly is a game changer,” Kelly said.  “We haven’t seen an entity like this before.”

Kelly pointed out ISIS has accumulated a lot of resources:  money and weapons.

He said the savagery the ISIS jihadists have displayed--with mass executions, the beheading of two, American journalists, and even crucifixions—could be used as a “recruiting tool.”

“They know that this has really riled up the American public,” Kelly noted.  “They did it for a purpose.”