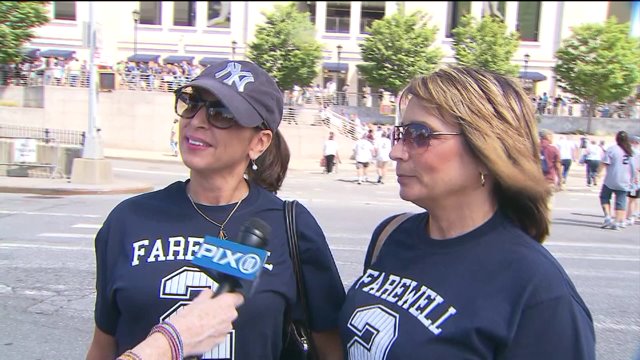 As the countdown to Derek Jeter`s final day as a player in pinstripes nears, players and fans dedicated Sunday`s game to commermorating the Yankees` captain.

NEW YORK (AP) — Derek Jeter remained as cool and collected as his play at shortstop when the New York Yankees honored their retiring captain with a 45-minute ceremony that included appearances by NBA great Michael Jordan and baseball ironman Cal Ripken Jr.

Jeter spoke to fans for about 3 minutes before Sunday's game against Kansas City. The Yankees didn't retire his number 2 or unveil a plaque in Monument Park, no doubt setting up a Derek Jeter Day 2 at some future time. New York took a similar approach a half-century ago, holding a Mickey Mantle Day in September 1965 before his 2,000th game, then retiring his No. 7 in June 1969 after his playing days.

Jeter announced in February his 20th major league season would be his last.

Speaking in front of the pitcher's mound at Yankee Stadium, he told fans "I want to thank you for helping me feel like a kid the last 20 years."