Cuomo and NY Dems sued by Teachout and Wu, who claim the party and Cuomo are way too close 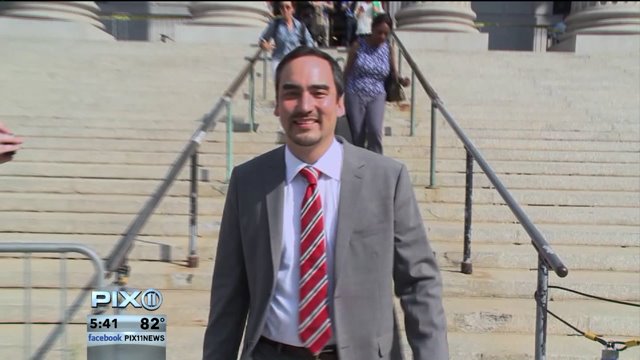 Is the Democratic party illegally declaring a winner before next week`s primary election takes place?

LOWER MANHATTAN (PIX11) -- The candidates opposing Gov. Andrew Cuomo in the Democratic gubernatorial primary say their party is illegally declaring a winner in the race before the election even takes place.

So on Friday, they sued to try and get a judge to stop the Cuomo campaign and the New York Democratic Party from mailing leaflets, making robocalls and running ads together.

"There is inherent conflict of interest," said Tim Wu, candidate for lieutenant governor, "when a party which is running the primary spends money supporting just one gubernatorial ticket ... Especially enormous amounts of money."

Wu was at state supreme court Friday afternoon presenting evidence, such as the Democratic Party's website.  The Teachout-Wu campaign argued that the party's website was essentially just another version of the Cuomo campaign's website.

He said that the party was spending "hundreds of thousands, and possibly millions" of dollars to promote the Cuomo-Hochul ticket.  He petitioned a judge to order the party to cease displaying materials that show Andrew Cuomo and Kathy Hochul only.

Calling this weekend before Tuesday's primary "crucial" to campaigning, Wu petitioned the judge to make a decision in the case by Friday night.

The Teachout-Wu request, however, is based on a state law that disallows party funds to be used for a primary election.  However, that statute had been struck down by both state and federal courts eight years ago.

In the end, at least half of the Teachout-Wu ticket may prevail, no matter how the judge rules in the case filed on Friday.

Tim Wu has received the endorsement of the New York Times, and the Teachout-Wu ticket has gotten the Sierra Club's endorsement, among others.

Wu is expected by some political analysts to have a respectable showing in the primary.

If he wins (the gubernatorial and lieutenant gubernatorial votes are separate on the ballot in New York), it would force Cuomo to run in the general election with a running mate who wasn't of his choosing, and who, in fact, opposes Cuomo and his policies.

As for the court action, PIX11 News asked Wu if it could backfire, by drawing additional attention to Cuomo's get-out-the-vote materials.

Wu said he and Teachout had not considered that while making his decision to sue.  "This is about being fair," Wu told PIX11 News.  "And what the party is doing, simply is not fair."

"It's kind of a farce, a mockery in fact," he said, "for the party to say, 'Okay we have a primary,' and then favoring one side and spending millions of dollars on that side."