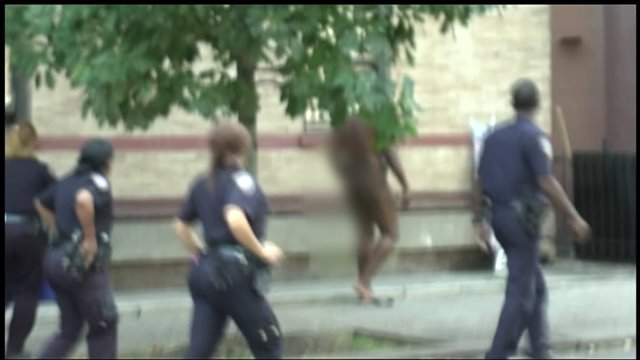 It happened near a Harlem park where kids were playing.

NEW YORK (PIX11) -- Police officers used a stun gun to take down a naked knife-wielding man who was terrorizing families near a Harlem park this week, NYPD said.

The bizarre incident was caught on camera. It happened about 3 p.m. Thursday near Martin Luther King Park at 114th Street and Lennox Avenue, police said.

The unidentified man, who remained in the hospital Friday, was spotted swinging a knife near the park. When officers arrived, he had already allegedly pushed down a 70-year-old man who suffered minors cuts to his head, according to a police spokesman.

A few officers followed him down the sidewalk, yelling for him to stop. Then moments later, one used a taser to subdue him.

The men fell to the ground and was immediately surrounded by at least a dozen officers. He was taken into custody and away in an ambulance.