Beheading of Steven Sotloff: Family speaks out as US aims to ‘degrade and destroy’ ISIS 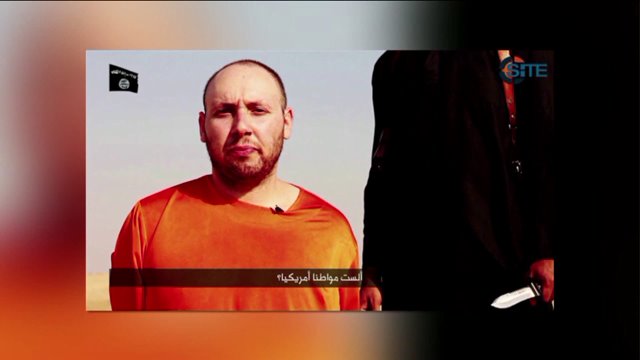 The President is vowing action against the terrorist group ISIS for the killing of journalist Steven Sotloff.

(CNN) -- America's top defense official says the goal of the United States is to "degrade and destroy" the capabilities of ISIS fighters in Iraq and Syria, not contain them.

The statement by Defense Secretary Chuck Hagel came during an interview with CNN's Jim Sciutto on Wednesday, just hours after President Barack Obama said the United States will not be intimidated by the killers of two American journalists.

"Those who make the mistake of harming Americans will learn that we will not forget ... that our reach is long and that justice will be served," the President said.

Steven Sotloff was the second U.S. journalist to be beheaded by ISIS.

Sotloff's family broke their silence Wednesday, describing the journalist not as a hero but "a mere man" who tried through his reporting to show the plight of people in Syria.

"He was no war junkie," family spokesman Barak Barfi said, reading a statement from the family.

The killing is the second beheading of an American journalist in two weeks, and the militant group said it's a result of Obama's decision to conduct airstrikes in Iraq against ISIS, which also calls itself the "Islamic State."

"It makes you sick to your stomach, but it again reminds you of the brutality and barbarism that is afoot in some places in the world," Hagel said. "...It won't just recede into the gray recesses of history until we stop it."

All options -- with the exception of a ground invasion -- are on the table to address the threat posed by ISIS, Hagel said.

Those options include possible airstrikes in Syria, where ISIS has established a stronghold in and around the northeastern Syrian city of Raqqa.

Vice President Joe Biden added his own voice to the calls for justice, saying the United States will pursue the killers "to the gates of hell."

"As a nation, we are united, and when people harm Americans, we don't retreat, we don't forget," he said at an appearance near Portsmouth, New Hampshire.

'A punch to the gut'

In a scene eerily similar to an earlier video of the death of U.S journalist James Foley, Sotloff kneels in the desert, dressed in an orange prison-style jumpsuit. A masked "executioner" lords over him, wielding a knife.

"For so many who worked so long to bring Steven and the other Americans home safely, this was not how the story should've ended," he said in a statement Wednesday.

"It's a punch to the gut. The U.S. government has used every military, diplomatic and intelligence tool we have, and we always will. Our special operations forces bravely risked a military operation to save these lives, and we've reached out diplomatically to everyone and anyone who might be able to help. That effort continues, and our prayers remain -- as they always are -- with the families of all hostages who remain trapped in Syria today."

This summer, several dozen of the most elite U.S. commandos flew into Syria but couldn't find the hostages, including Sotloff and fellow journalist James Foley, a U.S. official told CNN last month.

The UK said it attempted to rescue one of its citizens held by ISIS "some time ago" but failed.

UK Foreign Secretary Philip Hammond provided scant details of the rescue attempt or any other plans in the works.

"You wouldn't expect me to discuss various options that we will be considering," he said. "But I can assure you that we will look at every possible option to protect this person."

"This country will never give into terrorism ... a country like ours will not be cowed by these barbaric killers," UK Prime Minister David Cameron said.

"Our thoughts are with the British hostage and his family," Cameron said Wednesday in the House of Commons.

Speaking Wednesday, Obama addressed his much-criticized statement last week that he has no strategy on ISIS. He said he was referring to a military strategy in Syria that "might" require congressional approval.

Obama said the world needs a regional strategy to defeat the group.

"We've been putting together a strategy that was designed to do a number of things. ... What we have to make sure is we have a regional strategy in place," he said.

The video of Sotloff's execution is similar to one released two weeks ago showing Foley's killing.

The executioner appears to be the same person, and the location of the two killings also appears to be similar, probably in or around the Syrian city of Raqqa, one of the safest areas for ISIS, said Peter Neumann, a professor at King's College London.

"It is almost the exact same choreography," Neumann said.

The journalist speaks; the executioner speaks. Then the victim is beheaded.

In the video released Tuesday, the British hostage is shown after the beheading of Sotloff, just as Sotloff was shown in Foley's video.

"This is a recruitment video," Chris Voss, a former FBI international hostage negotiator, said Wednesday about the latest release.

CNN terrorism analyst Paul Cruickshank said it was an awful but calibrated response to U.S. airstrikes.

"This is ISIS doing the minimum possible to satisfy the blood lust of their supporters around the world," he said.

After Foley's death, the British ambassador to the United States said that experts in his country were close to identifying the killer. He has not yet been named.

A public memorial service has been scheduled for Sotloff on Friday in Miami.