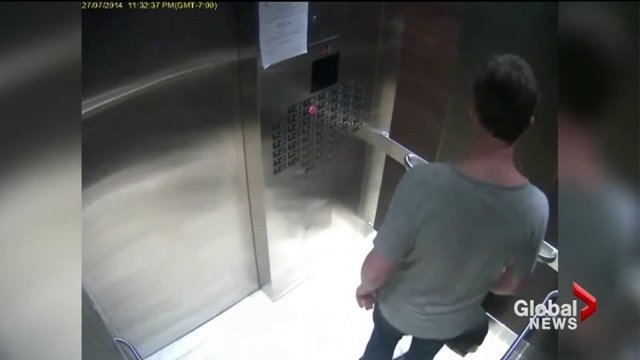 The CEO of a large Stamford catering company has people calling for his job after he was caught on camera allegedly abusing a young dog inside an elevator.

STAMFORD, Conn. (PIX11) – The CEO of a large Stamford catering company has people calling for his job after he was caught on camera allegedly abusing a young dog inside an elevator.

The ugly incident took place inside a downtown Vancouver hotel, and sparked a BC SPCA investigation after Desmond Hague was seen repeatedly kicking a cowering Doberman pinscher puppy and pulling it violently by its leash, according to Canada’s Global News.

Hague said in his apology that the dog wasn't his, and that he was pet-sitting for a friend when the pooch, named Sade, caused him to "lose control" after a "minor frustration."

Hague says he is "ashamed and deeply embarrassed" after he was allegedly caught on video kicking a dog.

"Unfortunately, I acted inappropriately, and I am deeply sorry for that and am very grateful that no harm was caused to the animal," Hague continued.  "I have reached out to the SPCA and have personally apologized to the dog's owner."

The 1-year-old Doberman showed signs of abuse and was "removed after being found in distress," according to a  search warrant obtained by the Canadian news agency.

Centerplate, which caters to professional sports stadiums and entertainment venues, similar to Aramark, issued the following statement to PIX11:

"We are aware of the incident involving Centerplate CEO Des Hague and the attention surrounding it. The company has now gathered all of the current facts from local authorities and is in the process of conducting an internal review. Centerplate does not condone the mistreatment of animals by any of its employees. Mr. Hague has agreed to attend counseling to address his anger management issues and has publicly expressed he is deeply ashamed and remorseful for his behavior. He has apologized to everyone directly involved as well as to the company's clients and employees, and has pledged a significant, personal, multi-year financial commitment to help support the protection and safety of animals. There will be a public statement as soon as Centerplate completes its review."

"In no way do we condone the mistreatment of animals.  This is a personal matter involving our CEO that we are currently investigating."

In no way do we condone the mistreatment of animals. This is a personal matter involving our CEO that we are currently investigating.

Anger over the incident has many calling for his resignation and the boycott of Centerplate products and services.  Hague has already deleted his own Twitter account amid the controversy.

@centerplate If your CEO had any dignity, he would resign. You are condoning the mistreatment of animals while he remains CEO.

@centerplate I think all your customers should consider it a personal matter and drop you as a vendor.

@centerplate that's not a 'personal matter' that's a criminal offense. but, good try.