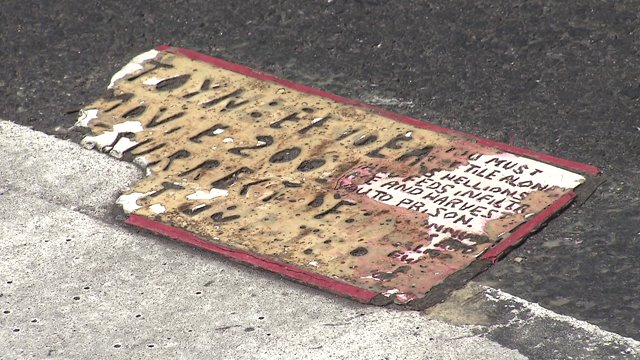 If you walk in New York York City, you`ve probably stepped on, over or around license plate-sized markers embedded in the streets of busy intersections and never noticed them.

NEW YORK (PIX11) -- If you walk in New York York City, you’ve probably stepped on, over or around license plate-sized markers embedded in the streets of busy intersections and never noticed them.

But a Tribeca Film Festival staffer, familiar with the so-called Toynbee tiles, stumbled on one recently that was covered with tar. She then called on her colleagues to take a look.

One of them was Tribeca Film Festival Director Genna Terranova who said that after peeling back the tar paper, the Toynbee tile revealed itself.

“Now we have one in our neighborhood,” Terranova said.

The tile was found at Greenwich and north Moore streets, near the film festival’s headquarters.

They apparently appeared first in Philadelphia in the 1980s then showed up in major cities around the country and have been spotted as far away as South America.

“Toynbee” is believed to be the historian Arnold Toynbee, known to make comments about death and the afterlife. “Movie 2001” is a likely reference to Stanley Kubrick’s movie “2001: A Space Odyssey.”

A 2011 documentary called “Resurrect Dead: The Mystery of the Toynbee Tiles” theorizes a Philadelphia man is behind the bizarre plaques.

But no one knows for sure who’s responsible, and what the message on them means.

“The mystery continues because we’re not sure if it’s the same person or multiple people doing it,” Terranova said.