Jewish group speaks out against Palestinian flag on Manhattan Bridge 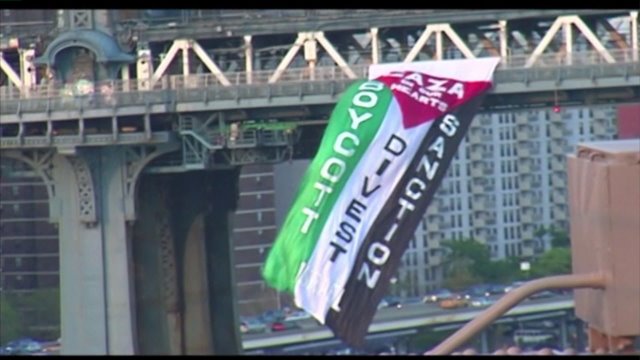 NEW YORK (AP) — A prominent Jewish group wants city leaders to condemn a politically charged banner that showed up on the Manhattan Bridge during a Pro-Palestinian march.

The Anti-Defamation League denounced Wednesday's demonstration and the giant "Boycott, Divest, Sanction" banner as an attempt to "delegitimize Israel."

The banner appeared as hundreds of people marched Wednesday on the neighboring Brooklyn Bridge. It was taken back up a short time later.

The BDS movement is an international effort against Israel over the Gaza settlements.

He says the BDS message blocks any chance at productive discussions of the Israeli-Palestinian conflict.

Police say no one's been arrested in connection with the banner display.

An investigation is continuing.