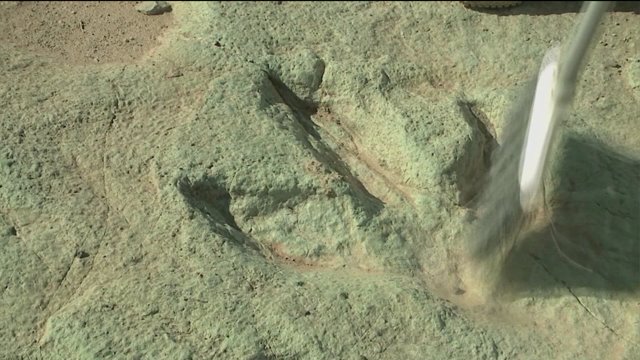 A hiker has discovered a new collection of footprints left behind 125 million years ago by a number of different dinosaurs.

MOAH, Utah (KSL) -- A hiker has discovered a new collection of footprints left behind 125 million years ago by a number of different dinosaurs.

So far, the location is being kept secret. But the public may get a chance to see the tracks as soon as a few weeks from now.

"It's tracks of the past, really, and it's very cool to be trying to preserve that information," science writer and volunteer Allyson Mathis said.

Volunteers are sweeping, scraping and brushing the stuff that's hidden the tracks from view for eons.

"Over 200 tracks that we're aware of so far that we've uncovered," volunteer Lee Shenton said. "And at least one case where there's 17 consecutive prints from the same animal.

"I think it's going to be something really important. It has at least a dozen different animals."

For some of those species, scientists have never found a single bone they left behind.

A hiker discovered a new collection of footprints left behind 125 million years ago by a number of different dinosaurs in what today is Utah. (Photo: CNN)

"About 125 million years ago in the cretaceous," BLM paleontologist Rebecca Hunt-Foster said. "So it helps kind of fill in these gaps about these animals that we don't know much about, that we know were here, but we just don't find their bones."

An ancient crocodile dragging its tail apparently left a slash in the hardened mud.

A three-toed meat eater walked there too, similar to the familiar and frightening Utahraptor.

"That's the claw that had the big scary claw on it, like in 'Jurassic Park,' " Hunt-Foster said.

What Mathis finds fascinating about track sites is they "record behavior of dinosaurs in ways that the bones or body fossils cannot."

The volunteers are cleaning the exceptionally well-preserved tracks so the BLM can document them with 3-D photography.

"And then we'll be able to replicate any of the tracks, should they ever be damaged or destroyed," Hunt-Foster said. "And also people will be able to study them without doing damage to the actual surface."

It's a quirk of nature: footprints left in mud that hardened into rock, now giving humans a chance to connect with our ancient predecessors.

"It's pretty awesome to know that an animal walked right underneath where you're working and that these creatures were once living, breathing creatures that were all over the place," Hunt-Foster said.

The BLM is raising funds to build a trail to the dinosaur tracks. The agency hopes to have the site open to the public by October.