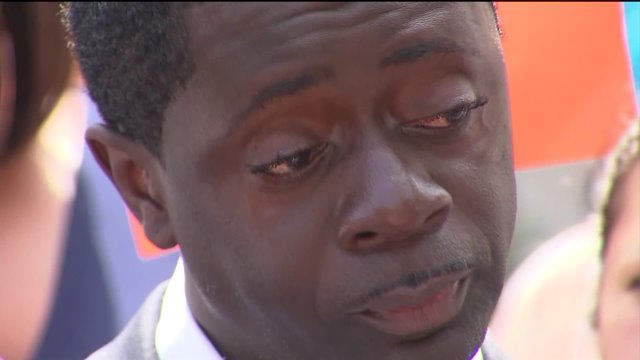 They want to have their day in court, and have been backed by 33,000 supporters.

NEW YORK (PIX11) -- "No justice! No peace! Convene a Grand Jury for Ramarley" was one of three chants by supporters of Ramarley Graham on Wednesday afternoon at Foley Square in Lower Manhattan.

The supporters came together to protest the U.S. Attorney for the Southern District, Preet Bharara, as well as his office for failing to meet with Graham's family. They also wanted to investigate the NYPD'S Richard Haste, the officer who shot the 18-year-old back on February 2, 2012.

"I'm really puzzled, I'm confused and I'm angry.  Why am I angry?  My son has been dead for almost 2.5 years, 2.5 years, and I'm still waiting for our day in court," said Frank Graham, Ramarley's father.  He isn't alone in his fight, Ramarley's mother, Constance Malcolm, has been demanding justice since the day the teen was gunned down.

"You just can't shoot them and get away with it and we have to set an example now in Ramarley's case because if we can't get justice for Ramarley's case where a cop broke into a house.  We ain't never going to get any justice in no other case," said Malcolm who wore a shirt bearing her son's name.

Minutes after the crowd of supporters raised their hands as a symbol that they will not surrender in the search for justice, the crowd marched to the front doors of the U.S. Attorney's Office for the Southern District.

They carried with them boxes that contained more 31,000 signatures demanding that the Department of Justice conduct an investigation of Haste.

For Constance, the DOJ is now on the clock, "Now they have 30 days to let us know what they want to do, because I think we deserve at least that much to know what happened."

A spokesman for the U.S. Attorney for the Southern District issued the following statement Wednesday evening:

Last fall, this Office began an independent review of the evidence regarding the death of Ramarley Graham after the local authorities completed their investigation and ultimately were not able to bring any charges arising out of the shooting.  Today we received a letter from the mother of Ramarley Graham and other materials, which we are reviewing.  This Office is acutely aware of how painful it is to lose a child in an encounter with law enforcement under any circumstances.  In addition to reviewing evidence obtained from local authorities, this Office has been conducting its own independent investigation of this tragic incident.  There are many reasons that a federal civil rights investigation should be conducted confidentially, including grand jury secrecy rules, as well as prudential and other reasons, including fairness to all the parties involved.  Above all, a proper investigation must be thorough, fair and independent so that in the end justice is done, and we are absolutely committed to that.  Finally, it should be understood that this Office has repeatedly been in communication with the attorneys for the mother of Mr. Graham and we will continue to do so.

However, when reached for reaction to the statement, Royce Russell, the Graham family attorney, issued the following statement to PIX 11 News, "That is an inaccurate statement. I have not nor my clients have heard from the U.S. Attorney's Office in at least 5 to 6 months."