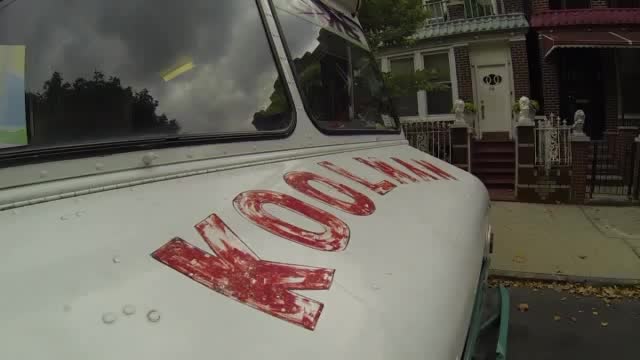 Godfrey Robinson said he was master of his "Kool Man" ice cream route for 22 years in East New York, Brooklyn but the Mister Softee franchise finally succeeded in squeezing him out.

BROOKLYN (PIX11) -- Godfrey Robinson said he was master of his "Kool Man" ice cream route for 22 years in East New York, Brooklyn but the Mister Softee franchise finally succeeded in squeezing him out.

"There are Mister Softee ice cream trucks riding around with no permit and no vendors' badges and they're harassing my business, and it's not fair to me when I pay taxes," Robinson complained to PIX11 Investigates on Blake Avenue in Brooklyn.  "No one's doing nothing about it."

Robinson claims the Mister Softee trucks, which come from a depot at 400 Stanley Avenue in Brooklyn, have been chasing his Kool Man vehicle in recent years in a turf war over the ice cream trade.

"I'm trying to make an honest living," Robinson said to PIX11.  "The guy's working with no permits, and he's harassing me!"

The guy that Robinson is talking about is Hillary Guishard, who owns the depot at 400 Stanley Avenue.

When PIX11 Investigates caught up with Mr. Guishard this past Monday, he said the trucks with Nassau stickers park their vehicles in his lot but do their business outside of Brooklyn in Nassau.

"The trucks are individually owned," Mr. Guishard told PIX11.  "They're allowed to park here and drive over to their routes."

But Godfrey Robinson provided cell phone video showing the trucks with Nassau stickers were selling in Brooklyn.  And PIX 11 News followed one Softee truck, with the Nassau sticker, traveling down Wyona Avenue in East New York and stopping several times, looking for customers.

At one point, the truck stopped to sell to a girl eager for a vanilla cone with chocolate sprinkles.  When we asked the vendor if he had a New York City permit, he told us to look on the other side of the truck.  When we walked to the other side, the truck quickly pulled away.

Guishard said some of the truck operators may be stopping to make a fast buck on the way to their actual routes:  "They're gonna run to make some quick money and then run to their route," Guishard claimed. "But they are not allowed to vend with Nassau County permits in New York City."

When PIX 11 contacted the New York City Health Department, we were told that ice cream sellers seeking a "Mobile Food Vendor" permit would spend $200 for a license that lasts two years -- a license that's contingent on passing an inspection.  Vendors also pay $53 for a class and $50 for their vendor's badge.

"He has fifty trucks, I have one truck," Robinson said, "so how can I pick on him?"

Still, Robinson said, he felt the need to right a perceived wrong.

"I'm the one who went public," Robinson said, "which everyone wanted to do, but they're so afraid of the man, they don't want to."