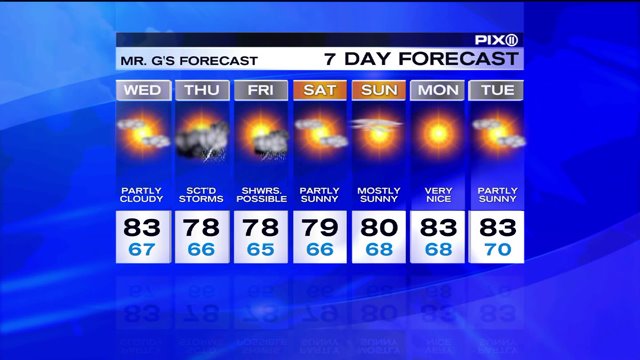 A low pressure system will slowly make its way from the Ohio Valley into the Mid Atlantic allowing the chance for a few showers to develop tonight.

PIX11 WEATHER CENTER — A Hurricane Katrina-level storm heading to the Gulf Coast in time for the catastrophic system’s ninth anniversary?

Let’s take a deep breath and look at the facts.

While social media has become a source of weather news for all us, it’s easy to forget that anybody can post MISINFORMATION.

Bloggers who fancy themselves as experts on meteorology have access to information that was once available  only to experts. Any weather enthusiast can see storm-track models and jump to ominous conclusions.

One blogger saw a data run on a tropical system that hasn’t even formed yet and saw the potential of a catastrophic hurricane making landfall near New Orleans — a so-called “Katrina Part 2.”

He then created a post showing the Gulf Coast in red, saying that there are strong concerns about a major hurricane striking the area, which is in many ways still recovering from Katrina.

People, especially in the Southeast, spread this post like wildfire. While the poster may have had good intentions, the truth of the matter is that the blog caused unnecessary panic.

The National Hurricane Center, vividly aware the post had gone viral, put this statement out in an effort to stem the frenzy:

“Nearly every [tropical] disturbance poses some potential to become a dangerous hurricane. Folks in hurricane-prone areas should always be keeping an eye on the tropics and be prepared to respond when a true threat develops, but also remember the limitations in the science. NHC’s forecasts of tropical cyclone formation and track extend out only to 5 days – because the science hasn’t advanced enough to reliably forecast beyond that time frame. (We’re working on internal forecasts out to 7 days, but we’re a ways away from feeling comfortable making them public because the errors can be quite large.)

The bottom line really is: be alert, be prepared, but also be wary of long-range projections that go beyond what the science can offer.”

Once again, the system hasn't even formed, and an experimental five-day outlook from the National Hurricane Center shows a large blob of a path for the disturbance.

So with all the hoopla now settled over another Katrina, the question is, what can you do to avoid falling for -- and spreading -- weather hysteria?

You can begin by checking the credibility of the poster. Readers can check the bloggers “about me” page and see if the individual has formal training in meteorology. That will help you get a sense for how reliable these extended forecasts actually are.