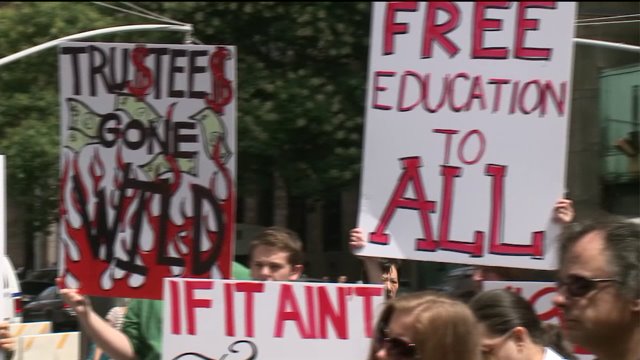 Imagine something that you usually get for free suddenly costing you tens of thousands of dollars. That`s what`s happening at one of New York`s oldest colleges.

EAST VILLAGE, Manhattan (PIX11) -- If something that's always been free of charge suddenly cost a lot of money, what would your reaction be?  That's the question students at one of New York's most distinguished universities are asking people now, but in their case, the question is  not hypothetical.  The Cooper Union, for the first time in its 155-year history, has billed incoming students for tuition, and for most of the 250 entering freshmen, the cost is no small matter.

"It didn't even seem real," said Claire Kleinman, regarding the tuition bill she received in the mail a few days ago for the 2014 - 2015 academic year for the school on Astor Place.  She said that when she opened the bill, she got a case of sticker shock.  "Twenty-one thousand, nine hundred twenty-five dollars," she said with a tone of slight amazement as she read off her bill word for word.

It's a lot of money by any measure, but it's only half of tuition at the private art, architecture and engineering university.  Still, the fact that anything is being charged at all, for the first time ever in the distinguished school's history, has been a shock to many students and alumni.

A few dozen of them turned out at New York Supreme Court on Friday, where a judge heard arguments which said that Cooper Union's proposal to charge tuition was in violation of its charter, which allows the university to benefit from tax free status.

"They have to learn to save money, as they do know how to spend money," said Richard Emery, lawyer for the students and alumni suing Cooper Union's trustees in order to keep the institution tuition free.  Among his clients is Kleinman, the incoming freshman who was stunned over her tuition bill.

As an attorney for Cooper Union said in court, the turnout of protesters in the courtroom and outside of court showed that this issue is controversial.

Protesters displayed signs made by art students declaring such messages as "NO TRUSTees."  One demonstrator displayed a hand puppet designed to look like Cooper president Jamshed Bharucha.  It bore a button saying that Bharucha is a puppet of the Board of Trustees.

The demonstrators hold the same view as the plaintiffs in the court case.  They argue that the university's practice of charging tuition is a violation of the intention of university founder Peter Cooper.  He established a charter for Cooper Union that would enable students to receive a college education free of charge, funded by rent on high-profile properties the university owns, including the land on which the Chrysler Building now stands.

The university, meanwhile, released a statement through its vice president for communications, Justin Harmon, which says in part:   "No one associated with Cooper wanted to change a tradition as valued as the full-tuition scholarship, but dire financial realities required us to make tough decisions to preserve Cooper for future generations. The long term survival of The Cooper Union was dependent on making this difficult change."

Thanks to financial aid, scholarships and a higher percentage of students than usual being eligible for federal need-based funding, many incoming students will end up paying little or no tuition.  None will pay more than half tuition, by university order.

Still, many students and alumni feel that a Cooper education should remain free of charge, which is why they're taking the case to court.  The judge, Nancy M. Bannon, may not end up ruling on the issue until after classes begin next month.

If she rules in students' favor, they expect a full tuition refund.

No matter how Judge Bannon rules, her decision is expected to be appealed to a higher court.