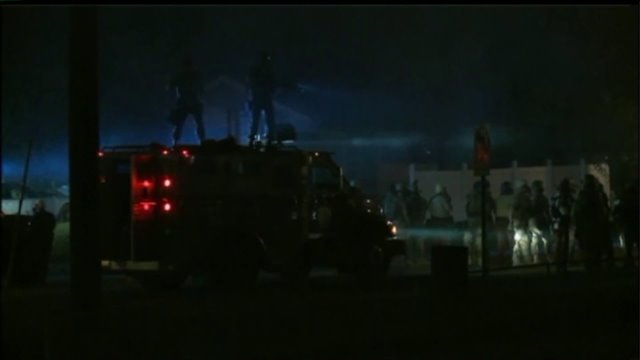 This is not Iraq, but these scenes prompted Missouri’s governor to call the town of Ferguson a war zone following demonstrator’s Wednesday night clash with police.

It was not a flattering scene, and when the dust settled, the local police department found itself no longer in charge of security.

"The Missouri highway patrol under the supervision of Captain Ron Johnson, who grew up in this area, will be the directing the team that provides security in Ferguson," said Gov. Ferguson.

Ferguson’s community leaders are encouraged by the change in command.

But regardless of whether the crowds have been laced with pockets of violence, as police claim or entirely peaceful – as community leaders say they have been - will a change in uniform affect what Professor Maki Haberfeld describes as a militarized response?

Haberfeld, chair of the Police Science department at John Jay College of Criminal Justice, defends a police department’s right to defend itself - and the public.

But she argues what’s changed over the years isn’t the way officers break up a crowd, but the tools and tactics they’ve adopted from outside influences.

“Certainly since 9/11, the department of homeland security generated a lot of grants that allowed them to buy equipment that is not just military grade, but used against terrorists around the world by US military. So when you think about it, just purchasing this type of equipment, and allowing police officers to have it in their possession – by default we generate a change in subculture,” said Professor Haberfeld.

In New York, home to a 35,000 member police department known for its arsenal of high tech, military style apparatus, community organizations like the Justice Committee are calling for a more diplomatic approach.

“A military mentality, is not going to work in a civilian population. You don’t ramp it up. You diffuse. You don’t bring in swat teams,” said Justice Committee member David Galarza.

That’s what’s being promised in Ferguson -- to a point.

“I think we're all about making sure that we allow peaceful and appropriate protests, that we use force only when necessary, that we step back a little bit and let some of the energy be felt in this region,” said Gov. Nixon.