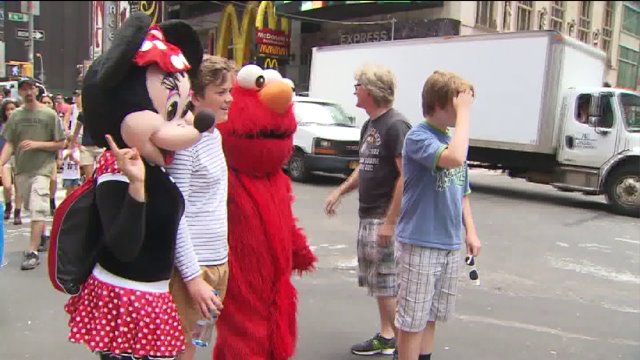 Ironmen, Spider-Man and Elmo were reprimanded by officers for allegedly bothering tourists in Times Square.

On the same day police handed out fliers warning visitors about the actors who pose for pictures in exchange for tips, officers busted four characters Saturday.

"Ironman" Javier Hernandez, 37, and "Elmo" Jose Maria, 25, were handcuffed for alleged disorderly conduct, police said. Khalid Lahmadi, 40, who also dresses up as Ironman, was let go with a summons.

"Spider-Man" Wilmar Suarez, 32, was arrested on suspicion of disorderly conduct and aggressive solicitation after he allegedly laid his hands on a potential customer.

Police were distributing fliers in several languages reminding visitors that photos with the costume creatures are free and tipping is optional.

The campaign comes two weeks after police say a man dressed as Spider-Man punched an officer who told him to stop harassing a tourist for a bigger tip.