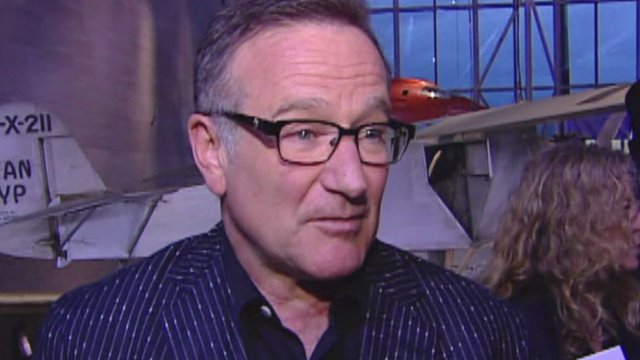 The beloved comic and actor was found Monday just before noon, the sheriff`s office suspects he died of a suicide by asphyxia. A medical examiner`s report is pending, Williams had suffered from depression according to his representative.

Editor's note: Comedic actor Robin Williams died at his Northern California home Monday, law enforcement officials said. Williams was 63. His representative said, "He has been battling severe depression of late." Stephanie Gallman, a CNN assignment editor, was diagnosed with depression last year despite being a frequent exerciser, a fairly healthy eater and an avid fan of Hula-Hoops.

(CNN) -- In August, after several months of seeing a therapist and a psychiatrist, I was diagnosed with depression.

The news came as a shock.

"I'm not depressed," I said defiantly, shaking my head when the doctor deduced that must be what was ailing me.

She laughed at my strange reaction, but I was serious. I don't want to be in that category of people. Everything they take in and spew out just breathes negativity, and they are difficult to be around. I despise these people.

But as she went down a list of symptoms, they were all there -- loss of appetite, trouble sleeping, waves of irrational anxiety, crying for no reason, loss of interest in work and hobbies, isolation and seclusion. I had nearly every one of them.

We went over my personal history, which included severe bouts with anxiety as a child, teenager, college student and young adult. I told her I assumed all kids were scared of dying, all teenage girls struggled with weight and eating issues, all college students struggled leaving the nest and everyone had a quarter-life crisis. My severe highs and lows that spanned a long period of time were all red flags.

When I told her my family history of mental illness that included at least one suicide, she threw her pen down on the floor as if this years-long mystery had finally been solved.

"It sounds to me like your body just doesn't produce enough serotonin," she said, matter-of-factly.

Her diagnosis sounded quite clinical. We'd only talked for an hour, but she seemed certain, based on our conversation and the briefing she'd had with my therapist, that my body's chemistry was simply off, causing me to feel down. She threw in slight OCD (obsessive-compulsive disorder) for good measure, to which I scoffed, thinking of the clothes strewn about my house.

"Your OCD is in your thoughts -- you think about things to the point of obsessing about them."

I agreed with her that I had been going through a slump but wondered if her diagnosis was a bit dramatic. I've always been a firm believer that happiness is a choice. I'm an optimist, so if I'm not happy, there has to be a reason for it. Could these feelings be the result of job stress? The on-again/off-again relationship I'd been fighting to make work for almost a year?

She nodded as I posed these questions and then said, "Sure, it's possible that all of these things could've contributed to how you're feeling. But it's also possible, and quite likely for you, that none of them did."

She advised me, as a frequent exerciser and fairly healthy eater, to continue those activities before she said what I'd feared the most.

"I think an antidepressant might help stabilize some of the chemicals in your brain."

I continued to challenge her, wanting to know how long I'd have to be medicated. She could tell I was anxious and looking for a solution to this problem that didn't involve drugs. But she was already writing a prescription and scheduling our next visit.

I wasn't thrilled with the diagnosis, but her explanation made sense to me and made me feel better.

Still, I refused to let myself completely off the hook, and as I left her office, I set forth on a path of self-discovery to identify how my actions might've contributed to how I felt -- a path that quickly brought up the ever-confusing chicken and egg game.

I was more hesitant than usual to keep what was going on to myself, telling only my family and those closest to me at the time what the doctor had said. Soon it became clear that I needed the support of more than a select few if I was going to get through this. Plus, it's not like me not to share what's going on in my life. And isolating myself, I suspected, was partly to blame for being in this situation in the first place. So, at the inappropriate places and the most inopportune times I could find, I began dropping the "D-bomb."

That's usually how I'd open the conversation, "Um, I have to tell you something. It might feel like a bomb, but I'm OK and everything is fine." As I started to open up about it -- I started to feel more like myself -- the Stephanie who isn't embarrassed by life's setbacks, who tackles difficult situations with humor and honesty.

No surprise, the wonderful people in my life have all been very kind and sympathetic, offering words of comfort and support, but reaction and willingness to talk openly about the disease has varied.

I was raised in a "pick-yourself-up-by-your-bootstraps," kind of a family, so while hurtful that some people immediately discounted that I was actually sick, it was those people who don't believe depression is a real thing that I identified (and still identify) with the most.

The sadness that comes from depression is not rooted in anything real. I'm not sad because of anyone or anything. I don't know why I am sad. I just am. I don't know why I worry about things that are so far out of my control. I just do.  And I so wish that I didn't.

Most people who don't believe in depression also don't believe in being medicated for it. Their warnings to me ranged from mindful caution to downright fear that I'd become addicted to pills and turn into a zombie.

Instead of drugs, they'd say, why don't you "do more of the things that you enjoy?"

"Tend to your garden."

"Find a project, something to focus your attention on."

These patronizing ("The Secret"? Are you serious?) prescriptions infuriated me, as if the reason I wasn't happy is because I hadn't tried hard enough.

These are the people I wanted to reach out and hug; they made me feel like I hadn't turned into Debbie Downer.

It's true, to the outside world, I do appear happy. And I realize this is hard to grasp, even for me, but I am happy most of the time. I am fully aware of how blessed my life is and express gratitude for it daily. I have worked hard not to let what's going on with me on the inside affect the way I present myself on the outside.

I guess you could say, I've become a Hula-Hoop in Walmart on the outside, want-to-crawl-into-bed-on-the-inside kind of gal; depression, until now, was my dirty little secret.

My happy-go-lucky cheerful attitude is the element of my personality that I am most proud of. This other part -- that obsessively thinks about things I cannot control, is self-loathing and uncertain -- is also a part of who I am; unfortunately, it's the part that has been screaming the loudest lately.

The third, and perhaps the most popular reaction to my dropping the "D-bomb," has been the barrage of friends divulging their personal connections to mental illnesses.

"My mom has bipolar. ... My uncle has been clinically depressed for years."

I was dumbfounded. I wanted to scream like Adam Sandler in "The Wedding Singer": "Gee, you know that information ... really would've been more useful to me yesterday!" Why isn't anyone talking about these illnesses that affect our most important body part -- our brain?

Last summer, I bought a poster that said, "Everything is OK. Maybe not today, but eventually." I framed it and hung it near my bed where I wake up every day and see it.

On my best day, I believe that quote to be absolutely true. I am attacking this diagnosis with every bit of energy and every resource that I have.

On my worst day, I feel like a different person -- tired and unfocused and desperate to feel like the real, fun, positive Stephanie I know is somewhere trapped inside me. I feel let down by the world but too exhausted to go out and change it.

Admitting I suffer from depression and anxiety has, at times, made me feel weak -- like I'm admitting defeat. I am hard on myself for no reason. I'm pissed that despite having every reason to be happy, sometimes I'm not.

My relationships have suffered -- some ruined completely -- because of this disease; some are of my own doing, not trusting those dearest to me and asking for help when I needed it. Others bowed out, not interested in riding this difficult and often unpredictable journey. I can't blame anyone for making that decision, but I'd like to think that even at my worst, I'm worthy of honesty, compassion and understanding.

Anyone who would judge me for this weakness that I've identified and am treating probably isn't someone I would want to work for or date anyway.

I am someone who struggles with her brain the way that others struggle with their heart.

I love deeply and laugh loudly.

I work hard; I play harder. And I always Hula-Hoop at Walmart.

For information on depression and treatment, go to the National Institute of Mental Health website.