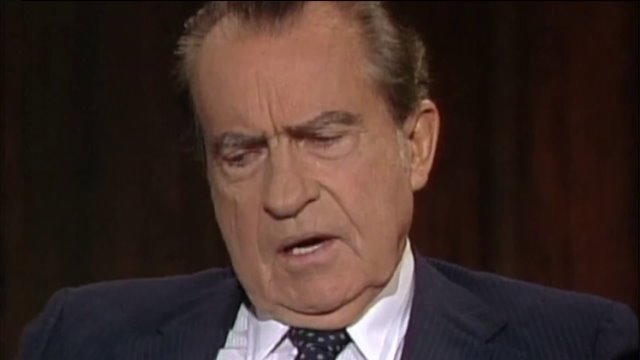 It was 40 years ago this week that Richard Nixon resigned his presidency as he faced almost certain impeachment in the wake of the Watergate scandal.

(PIX11)-- To commemorate the 40th anniversary of Richard Nixon's resignation as 37th President, the Nixon Library is releasing never seen video clips of an interview he did with a former aide in 1983.

In one segment he relates how he told Chief of Staff Al Haig, "I said Al, I really screwed up." Evidence surfaced that showed Nixon took part in a coverup of a 1972 break-in at Democratic Headquarters at the Watergate complex in Washington.

When he realized he was losing efforts in Congress to fight impeachment, Nixon said he considered three options, one, to resign, two to continue to fight and three to go to trial in the senate, which he said he rejected as "unacceptable because the country couldn't afford a crippled President."

In the interview, Nixon said his first instinct was to fight. "I'm a fighter. I didn't want to quit because it would be an admission of guilt, which it was." He said the most painful day was informing his family he was resigning.

He said he had no choice after recordings were released that showed he was a part of the coverup.

"This was the final note, the final nail," he said, adding, "You don't need another nail if you're already there, which we were." Nixon formally announced his resignation on August 5th 1974 and left the White House four days later. The Nixon library is releasing the new tapes on You Tube.