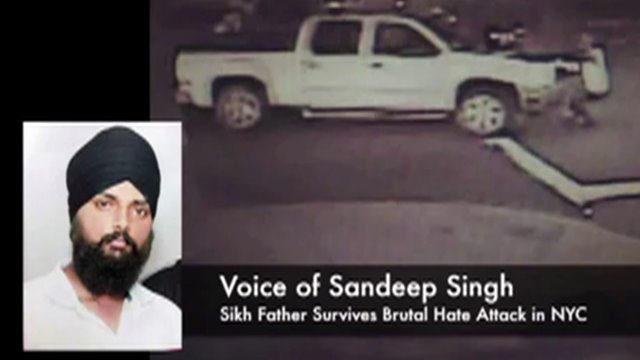 Singh continues to recover after being mowed down last week by a pickup truck in Ozone Park, Queens. Tuesday, he said he hopes for justice.

QUEENS (PIX11) - “I’m in a great deal of pain, but I will survive.  I was attacked because I’m a Sikh and because I look like a Sikh,” said Sandeep Singh from his hospital bed.

Singh continues to recover after being mowed down last week by a pickup truck in Ozone Park, Queens.  Tuesday, he said he hopes for justice.

According to witnesses and Singh’s wife, Singh was wrapping up dinner with friends and family after work last week when he was walking back to his office on 99th Street.  That’s when a man in a pickup truck suddenly began yelling racial slurs towards Singh.

“He said something like go back to your country, Bin Laden,” said Singh’s wife, Prabhpreet Kaur.

Sandeep Singh was struck and dragged for 30 feet. (DCPI)

The attack unfortunately didn’t end there.  The man allegedly accelerated, first bumping Singh, but then accelerating again and not only running Singh over but dragging him nearly 30 feet down the street.

On the 2nd anniversary of the day when six Sikhs were murdered inside a Wisconsin temple, Sikh’s in the Ozone Park neighborhood in Queens where Singh was attacked gathered in solidarity.

Police say they have few leads, but are investigating the crime as a possible bias incident.  Detectives describe the truck they’re looking in this video as a light colored 2007-2009 GMC 1500 Series Sierra.