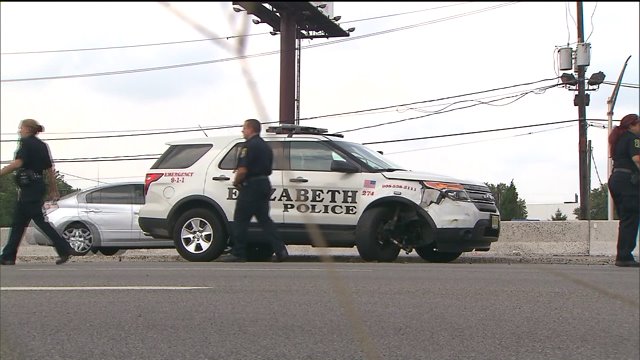 Police nabbed a bank robbery suspect who crashed his minivan after a chase on the New Jersey Turnpike Friday morning.

ELIZABETH, N.J. (PIX11) — A police pursuit of a bank robbery suspect on the New Jersey Turnpike Friday morning ended after the suspect jumped a concrete divider and hit two police vehicles in Newark.

Edison, N.J., police responded to a robbery at Investors Savings Bank on Amboy Avenue in Edison shortly after 10:30 a.m. Friday. The suspect, Carmine Mauro, 55, of Edison, fled in a green minivan and police chased him onto the New Jersey Turnpike. Mauro headed north and took Exit 13, leading police through Newark and Elizabeth before crashing on Routes 1 and 9, according to a news release from the Edison Police Department and Middlesex County prosecutor's office. After jumping the divider, Mauro hit two Elizabeth Police Department vehicles before stopping on the southbound lanes of the highway.

Mauro was arrested and charged with robbery and eluding police. He was taken to Trinitas Regional Medical Center in Elizabeth, where he is being treated for injuries from the crash. His bail was set at $250,000.

Edison police were assisted by the New Jersey State Police, Port Authority police and the Elizabeth and Newark police departments. Edison Police officer Joe Chonka was off duty and near the bank when he followed the suspect, according to police. Chonka sustained a minor injury and was treated and released from a local hospital. No other officers involved in the chase were injured.

Police are continuing to investigate.