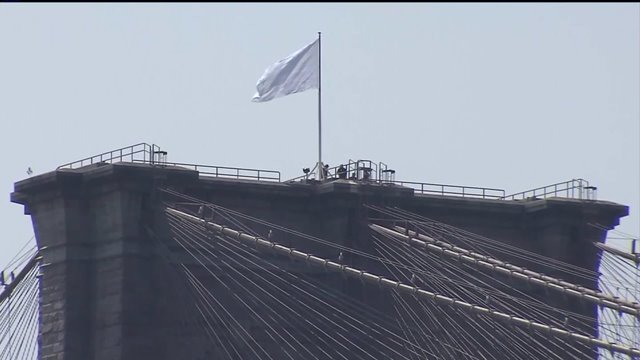 NEW YORK (PIX11) — Marijuana activist the Rev. Bud Green is not being seriously investigated for the Brooklyn Bridge flag swap, even though he claimed responsibility for the July 22 caper on his website.

"He may be a person of interest on a Jerry Springer show, but not on this investigation," says PIX11 crime consultant and former NYPD Detective Sergeant Wally Zeins.

Zeins says police are instead scouring social media and focusing on a group of "young urban explorers" from Manhattan, Queens and Long Island.

"Basically, those are young people that do things like climb bridges, go into vacant buildings, go into subway tunnels, just try to climb and explore different areas that are taboo," Zeins told PIX11.

Surveillance cameras are said to have captured pictures of at least five people in the early morning hours who swapped out the American flag for a bleached-out version, first on the Brooklyn and then the Manhattan tower of the bridge.

The people used tin lasagna pans to dim the lights, and so far there hasn't been a DNA match to lead authorities to a suspect.

Zeins says investigators are going subpoena cell tower records from the bridge, but it will likely take months to retrieve the records.