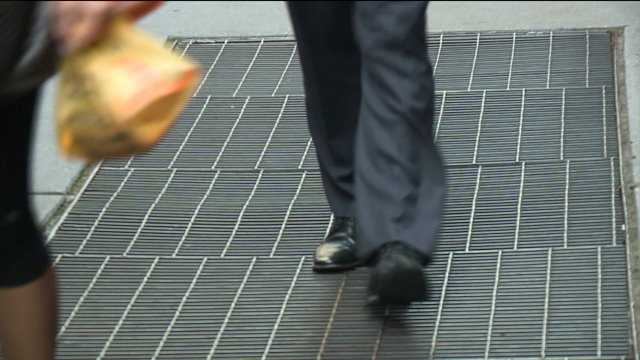 It`s a part of city life that`s far more prevalent in New York than any other U.S. city, and It`s a source of caution, anxiety and even paranoia for some people.

NEW YORK (PIX11) - It's a part of city life that's far more prevalent in New York than any other U.S. city, and It's a source of caution, anxiety and even paranoia for some people.  Metal grates in sidewalks that cover recessed spaces number 39,000 citywide by some estimates.

What's in those recessed spaces, as well as the depth of some of them, many people don't realize, including people who regularly walk across grates.  If they did, they might be more likely to join the many New Yorkers who avoid being on them entirely.  And while they would have good reason psychologically for avoidance, they would not have good reason statistically.

Perhaps the most famous stand on top of a sidewalk grate was done by Marilyn Monroe in the film The Seven Year Itch, in 1955.  In an iconic scene that was originally shot on a subway grate at 52nd Street and Lexington Avenue, the blonde bombshell told co-star Tom Ewell that she loved standing on grates over the subway in order to feel the rush of air under her skirt as trains passed by.

Marilyn Monroe famously revealed in the movie "the seven year itch" how she loved to feel the wind from passing subway cars go through the grate and up her skirt.

Not so for Pamela West.  She works four blocks away from where the renowned Marilyn Monroe scene was filmed, and PIX11 News encountered her as she waited, intentionally two feet away from a row of sidewalk grates, for a food truck to prepare her lunch.

While that's not true -- people do sue the city, sometimes successfully, for trips and falls on sidewalks, and even falls through sidewalk grates -- she said she'd rather not put herself in a position to have to.

Other pedestrians PIX11 News encountered weren't quite as paranoid about walking on grates, but that didn't mean that doing so didn't disturb them.

"I honestly try not to think about it," Midtown office worker Alex Doherty told PIX11 News.

Like so many New Yorkers, she avoids walking on sidewalk grates occasionally, and feels nervous when she does step on them.

PIX11 News encountered a woman at Columbus Circle tiptoeing across a grate, in an act that's often repeated in the city.  "It's all about the heel," she said.

It's of course no secret that women in high heels try not to get them caught in the grates.  But it's definitely not only women who steer clear.

A look below some of the steel- and ironwork lattices on city sidewalks supports his concern.  It's common for grates to cover spaces that are eight to ten feet deep, but many of the spaces are far deeper.  On the sidewalks on either side of the PIX11 studios, on East 42nd Street, there are grates covering spaces four and five stories deep.  A fall down them could leave a serous injury or could even prove fatal.

What's in those recessed spaces, as well as the depth of some of them, many people don't realize, including people who regularly walk across grates. If they did, they might be more likely to join the many New Yorkers who avoid being on them entirely.

A grate on Park Avenue South between 36th and 37th Streets is over a space that goes down some eight stories.  That cavern under the longstanding grate is so deep that it's now being used to build the East Side access to the Long Island Railroad, which runs far beneath the sidewalk's surface.

As hazardous as a fall there would be, there are other rail passages that pose a threat much closer to ground level.

Beneath a block-long series of grates on the sidewalk on 47th Street, between Park and Lexington Avenues, are railroad tracks.  The block on which the grates are located is a very popular spot for more than a half dozen food trucks and their customers.  In fact, hundreds of people walk down the block every minute to pick up their meals, and frequently they walk on the grates.

A good look down, though, through the bars of the grates, shows how Metro North trains pass regularly on their way out from nearby Grand Central Terminal.  The moving trains' roofs are only about two or three yards underneath the feet of unsuspecting food cart customers and passersby.

The roof of the Number 1 subway train comes even closer to an even larger number of pedestrians above it on the sidewalk.  At Columbus Circle, a tourist destination because of Time Warner Center, the Museum of Arts and Design and the entrance to Central Park there, at any given moment there are thousands of people on the circle.  Many of them walk across grates that cover the fast moving subway train just a few feet below them.

"I plummet to my death, yes," said one pedestrian, jokingly, about the hazard right underneath her.

Not joking, however, was neighborhood resident Cameron Balahan, who regularly walks over the Columbus Circle subway grates, he says, without a care.  "I figure someone before me would've fallen," he told PIX11 News.  "What are the odds it's me?"

Actually, he's right, someone before him has fallen.  In May 2007, Jessica Hinkmon, then 26, fell ten feet into mud at the bottom of a Con Edison utility trench in Midtown after the grate above it gave way.  She landed just a foot away from a live, 13,000 volt transformer, but was only slightly injured.

In August 2008, Eric Davis, then 20, fell eight feet down into a subway service area after the grate above it collapsed.  He recovered from injuries that were serious enough to send him to the hospital for a few days.

And almost two years to the day from Hinkmon's 2007 crash below ground, a group of 32 girls fell through a sidewalk grate in front of their Brooklyn yeshiva.  They'd been posing for a class photo on May 22, 2009, when the grate fell in below them.  Two of the girls broke bones in their legs, and had to be treated for serious injuries.

This summer, PIX11 viewer M. Sambula-Rodriguez sent in a photo of a foot-long gash on her son's right leg that needed 30 stitches to heal.  He got the injury after falling through a grate over a window well in a Brooklyn building.

None of the victims of those incidents would respond to requests from PIX11 News for interviews, even though they could answer Cameron Balahan's earlier question, "What are the odds it's me?"

In fact, the odds are much more remote.  The aforementioned cases of grate falling make up the majority of falls through sidewalk grates in New York City in recent years.

Considering that there are nearly 9.1 million people in New York City every weekday, and only one of them falls through a grate every 20 months or so, based on city, MTA, Con Ed and residents' data, the occurrence of a fall through a grate is very low.

To put it another way, "The odds of me getting hit by that car are greater," Balahan said, pointing to a passing car at Columbus Circle.  More than 16,000 people were injured in New York City traffic last year, and 178 died, numbers far higher than injuries from falling into sidewalk grates.

Still, people worry about falling in.

"There is a prehistoric, innate mechanism," psychologist and anxiety disorder specialist Melissa Horowitz, PsyD., said.  "It's a mechanism of protection in the face of danger... a fight or flight response," said Horowitz.

"It can be perception of danger, as opposed to actual danger," she told PIX11 News.  "When there's an acutal danger, like being chased by a grizzly bear, we want that fight or flight response to be activated."

Walking on a grate that covers a moving subway train a few feet below can be perceived as danger, she said, especially when one considers that in the rare instances when sidewalk grates collapse, they're covered widely in the media.

"If someone has had vicarious experience [with a fall or] heard of a negative encounter," Dr. Horowitz said, "it might raise their vigilance level."

Put another way, it's the inverse of playing Powerball.  The odds of winning that lottery are infinitesimally small.  However, because somebody eventually wins, people play anyway -- even though it is almost completely certain that they won't be the winner.

Similarly, because somebody falls through a sidewalk grate at some time -- even though it's a very infrequent occurrence -- people still choose to walk around the grates.

Perhaps another way to describe it is making absolutely certain of one's chances of survival by not taking any chances in a potentially hazardous situation.