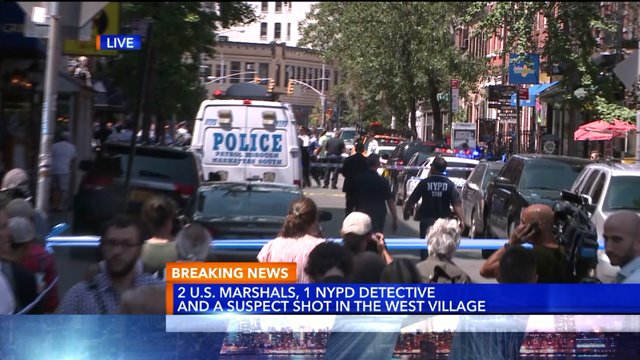 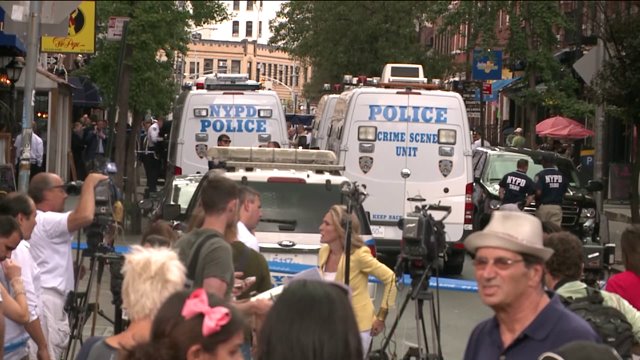 Charles Mozdir, inset, was working at a smoke shop on West Fourth Street in Greenwich Village.

GREENWICH VILLAGE (PIX11) – A fugitive child-molestation suspect wanted in California and featured on a CNN crime show Sunday night was shot and killed by law enforcers Monday afternoon in Greenwich Village after he opened fire on an NYPD detective and two U.S. marshals who were trying to arrest him.

The law enforcers, who are in stable condition, are expected to recover from their injuries in the shootout shortly after 1 p.m. at the small  Smoking Culture smoke shop at  177 W. 4th St. The suspect, Charles Mozdir , a 32-year-old photographer from California who had changed his appearance after more than two years on the run, was working at the shop, police said.

Child-welfare advocate John Walsh, the host of the CNN show “The Hunt,”  told the news network that Sunday’s repeat airing of the segment on Mozdir led to new information on the location of the suspect wanted on a million-dollar warrant.

Mozdir in June 2012 had fled authorities in San Diego, who wanted him for allegedly sexually abusing a feverish 7-year-old boy he had cared for while in the presence of the boy's mother, who was sleeping in a bed besides the child when the abuse happened, CNN's "The Hunt" reported. The child belonged to two of his friends, according to CNN. Mozdir had also been accused of sexually assaulting another young boy he had been babysitting.

Authorities from the Coronado Police Department and the U.S. Marshals Service searched for him far and wide, CNN reported, and on June 20, 2012, found Mozdir's car in Georgia.

Police Commissioner Bill Bratton said the NYPD detective first entered the store to confirm that Mozdir was in the store and alone.  Shortly thereafter, the detective and the two U.S. marshals entered, and Mozdir opened fire with his .32-caliber revolver, with 20 spare rounds in his pocket.

Police credited the bulletproof vest the detective was wearing with possibly saving his life. Investigators recovered a bullet that was lodged in the vest, and displayed the vest for reporters at a news conference at Bellevue Hospital Center Monday afternoon.

The NYPD detective, who has more than 20 years' experience and had recently been promoted, was working with the federal Fugitive Task Force.  One marshal was shot in the buttocks and the other was shot in the arm. The detective was shot twice in the stomach and was undergoing surgery.

Police declined to identify them, but said their prospects for recovery were good.

"We feel such gratitude, such appreciation for their bravery," Mayor Bill de Blasio said at a news conference.