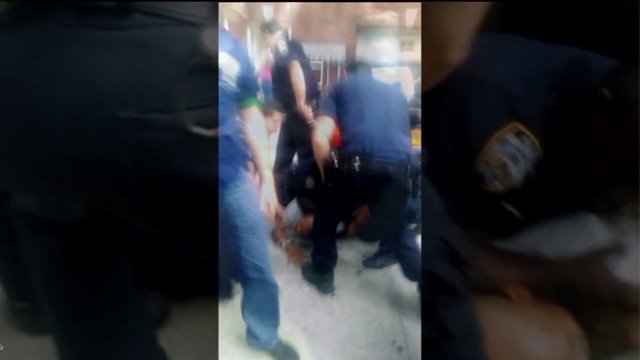 The NYPD is investigating another case of alleged excessive force caught on video.

The police department is investigating after the officer appears to stomp on the suspect's head while he's on the ground. This is the third video in two weeks of an arrest to go viral. On July 17, Staten Island man Eric Garner died after being put in an apparent chokehold by an officer during arrest, an incident that was recorded by a bystander.

Police say officers in Bedford-Stuyvesant saw 32-year-old Jahmiel Cuffee in possession of a small amount of marijuana on Tuesday night in front of 223 Malcolm X Blvd. The video picks up after an officer asks Cuffee for ID. He hands over the ID, but resists arrest.  One officer pulls his gun, but once they get Cuffee to the ground, it gets worse.

In the video, an officer is seen walking away, then coming back and making a motion with his foot.

"He abruptly stomped on top of the gentleman's head," said Gary Dormer, who recorded what happened on his cell phone. "He lifted his foot with excessive force and came down like he was stepping on an ant or a roach or something at the time."

Dormer told PIX11 that the officers were aggressive from the start.

"It could've been anyone of us," Dormer said. "He wasn't doing anything wrong and the officer just stepped on his head."

The video shows Cuffee taking something out of his pocket right before he goes to the ground, which sources said put the officers on alert.

Community Advocate Tony Herbert said he wants the officer he believes stepped on Cuffee's head to be removed from the job.

"This officer cannot represent our community and work for us if he's going to violate people's rights," Herbert said.

Police said they are investigating whether or not the officers used excessive force, and that they are looking into ways to revamp its training.

Police confirmed that Cuffee — who has been arrested at least eight times before for possession of marijuana — was injured, but said he did not have any head injuries. Dormer said Cuffee is taking aspirin for the pain, but that he "shouldn't have to go through that pain because he didn't do anything to deserve it."