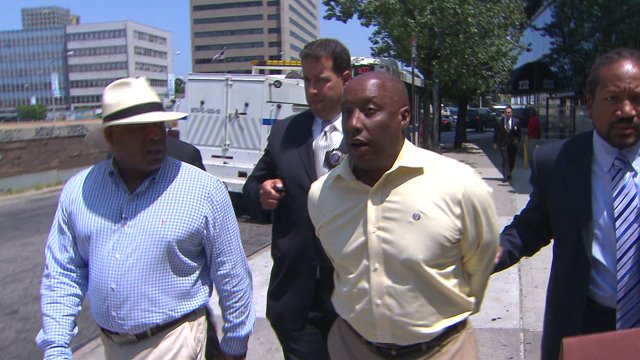 July 23rd, 2014 was a day quite a few people have been looking forward to for a long time. The NYPD finally slapped the handcuffs on Derrick Burrell.

QUEENS (PIX11) -- July 23rd, 2014 was a day quite a few people have been looking forward to for a long time. The NYPD finally slapped the handcuffs on Derrick Burrell.

I first told you about Burrell more than two years ago in Steve Bernier's case.  Bernier says Burrell took more than $100,000 to renovate his Queens Village home. Burrell gutted the place and didn’t come back. Bernier and his family were left homeless and still had to pay the mortgage on a house they couldn’t live in.

Bernier wasn’t the only one who says Derrick Burrell ruined his life. Police say they know of at least 7 victims. Wilmer Barreto gave Burrell $95,000.

“He said he had a great price for me and that he was going to construct the house in six months,” Barreto told me. “He hurt my family. And he has left me homeless.”

Burrell didn’t have much of substance to say in his own behalf when I finally came face to face with him as police led him away to face charges involving grand larceny, fraud and more. But Steve Bernier is encouraged.

“Some form of justice is what we wanted. Also for the other victims that he victimized it helps. It just shows if you’re persistent justice can prevail!”