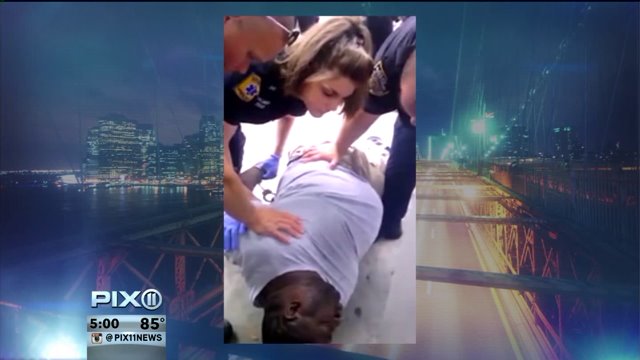 At least four EMS workers from Richmond University Medical Center are on modified duty in the wake of Eric Garner`s death.

"It's barbaric. I feel it's inhumane," said Carmen Ojeda about a plainclothes NYPD officer putting Garner, 43, into a choke hold and then, along with at least a half-dozen other officers, pushing the well-known father of six onto the sidewalk. Ojeda has had firsthand experience with medical emergencies in police custody.

When her 11-year-old daughter, Briana, had an asthma attack in a Brooklyn park four years ago, Ojeda turned the wrong way onto a one way street as she sped to the hospital. Officer Alfonso Mendez refused to help them when the mother flagged him down for assistance, and instead he tried to ticket her. Her daughter ended up dying.

Carmen Ojeda and her husband, Michael, also had with them at a small Monday afternoon protest a statement from the family of Anthony Baez. His NYPD choke hold death twenty years ago has been a part of the reason the choke hold has been banned by the NYPD since the early 1990s, under the direction of then-commissioner Bill Bratton.

The Ojeda and Baez families on Monday condemned the choke hold having been used in the arrest of Eric Garner last Thursday.

In the most widely seen video of the arrest, obtained from a bystander by the Daily News, the choke hold happens approximately 1 minute and 41 seconds into the incident. Then, 19 seconds later, the 350-pound man with a long history of arrests for illegally selling loose cigarettes, says repeatedly, "I can't breathe," as he's held on the ground, by officers. One of them visibly pushes and holds down Garner's head on the sidewalk while Garner repeats that he can't breathe.

"When he said [that]," Ojeda said, "the aggressiveness should have stopped, they should have started administering CPR or first aid."

Ojeda is also critical of private EMTs and paramedics who were called in to respond. In another cellphone video taken by a bystander, the medical first responders are seen not following the standard procedure of placing an oxygen mask on a patient who has complained of not being able to breathe.

At that point in the video, nearly five minutes after Garner has been put into handcuffs and arrested, another EMT is seen stepping past Garner while carrying emergency medical equipment which could potentially save the life of the man in custody. The equipment does not get used.

Instead, an EMT is seen and heard telling Garner that she's there to help him. She takes his pulse, touches his abdomen, and apparently does nothing more until she and police officers lift Garner's body onto a stretcher and take him to an ambulance.

An officer tells a bystander, "He's still breathing," toward the end of the video, but Garner is declared dead minutes later at the hospital.

"When you check for a pulse, that's not sufficient," said Michael Ojeda, Carmen's husband, and father of Briana, who died after Officer Mendez refused to give her medical aid four years ago. He and his wife are leading a campaign, championed by State Assemblyman Felix Ortiz, (D) Brooklyn, to require police statewide to be re-certified every year in CPR administration.

For now, Daniel Pantaleo, the plainclothes officer who had put Garner in a choke hold, has been stripped of his gun and his badge, and the two EMTs and two paramedics who responded, who have not been named, have been suspended without pay.

A statement from the medical center explained that operational restriction means the EMTs and paramedics having that status "cannot work in the citywide 911 system, pending investigation. The investigation is being conducted by the Office of Medical Affairs of FDNY. Internally, the hospital is evaluating the case through a quality assurance process."