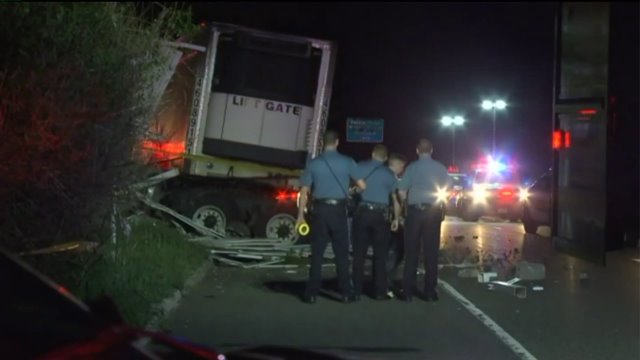 A police officer operating radar on a New Jersey highway was struck and killed by a tractor trailer Thursday, authorities said.

Officer Christopher Goodell, 32, was a five-year veteran of the force and recently engaged. He was working for the Waldwick Police Department when he was killed, officials said.

A tractor trailer traveling down Route 17 struck the officer near Bergen Avenue about 1:30 a.m., according to John Molinelli, Bergen County prosecutor. It happened in Waldwick, a borough of about 9,600 in Bergen County.

Waldwick police officer was killed this morning while operating radar on Rt 17 vehicle was struck by a tractor trailer. Matter under inv.

Molinelli said that even though the crash happened in the middle of the night, drivers along that stretch are known to move fast.

Goodell was monitoring drivers' speed when he was hit. Aerial footage of the scene shows an unmarked police car, its rear half mangled. The cab of the jack-knifed tractor trailer smashed through a fence and came to a rest inside the yard of a home, inches from a window.

It was not immediately clear if Goodell was inside or standing outside of his squad car at the time of the crash.

The truck driver was being questioned Thursday morning by detectives, but no arrests have been made, Molinelli said at a 5:45 a.m. news conference.

Goodell is the second New Jersey police officer to die in the line of duty this week.

Officer Melvin Santiago, 23, was shot and killed while investigating a robbery in Jersey City early Sunday. The shooter was also killed.

Mourners are expected to say their final goodbyes to Santiago at a Thursday wake and Friday funeral service.

This story is developing. Refresh this page for updates.