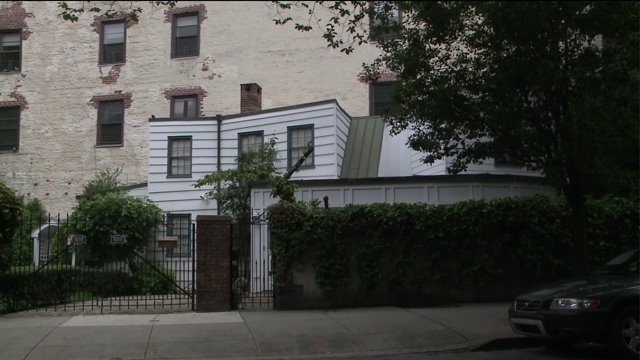 An iconic Greenwich Village farmhouse could be torn down to make room for more city condos.

NEW YORK (PIX11) -- A Greenwich Village neighborhood may be losing one of its main attractions: a quaint and quirky, historic, white little farmhouse at the corner of Charles and Greenwich Streets.

The nearly 5,000 square foot piece of property at 121 Charles Street was listed in the New York Times real estate section as a development site, with a $20,000,000 price tag.

Andrew Berman, executive director of the Greenwich Village Society for Historic Preservation, was shocked to see the ad.

“This is such a special, unique, historic spot in the West Village, and it’s part of a landmark district, and should stay that way,” said Berman.

Neighbors don’t want to lose the charm, and possibly gain a condo.

“God forbid,” remarked one neighbor, who identified himself as Kevin.

The house boasts at least one notable resident. Margaret Wise Brown wrote the children’s classic “Goodnight Moon” while living in the house in the 1940’s.

The current owner bought it in the late 1980’s. The old house wasn’t even located in the Village until 1967. That’s when it was moved from 71st Street and York Avenue to avoid being torn down by the property owner, the Archdiocese of New York, which wanted the space for housing for seniors.

But the gem of a house isn’t going away so fast, according to Andrew Berman.

“We and many others would fight very hard before the Landmark Preservation Commission, to make sure this is not torn down, and not replaced with some new generic hi rise,” Berman said.

PIX11 News put in a call to the broker, ERG Property Advisors, but did not hear back.