It’s a “G” Thing: New food truck gives bright future to those with dark past 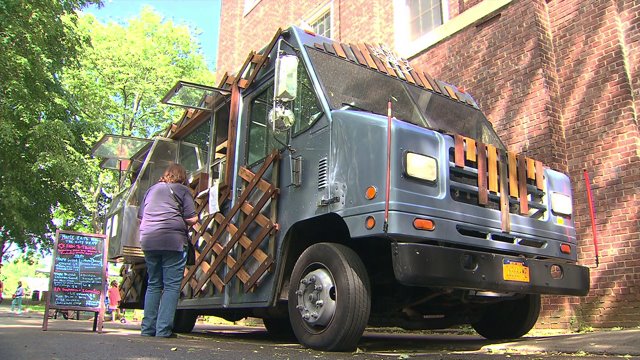 She fell in love with the idea of maple syrup while skiing with her family in Mont-Tremblant, Quebec.

It hardened then was twisted on small wooden spoons to serve to the gathering crowd.

The unique treat is known as "Sugar on Snow." The simplicity inspired her.

And it seems customers are loving the maple theme too! “Unbelievable!” “It’s excellent!” “Delicious!”

This tasty truck opened for business on April 3rd.  All summer long you can find it out on Governor’s Island.

The truck hopes to be in other locations around the city as it grows. But delicious food is not all this meals on wheels offers.

“I was around the wrong crowd. Let’s just say that,” Jaquial, a Snowday employee, explained. “Yeah I got in trouble.”

“We hire, teach and empower young people who are coming home from the criminal justice system,” Lexton said.

“A felony conviction is like the ultimate black eye,” Roy, Snowday chef said. “No matter how many years pass by it’s always on your record.”

Which makes it really difficult to find a job.

“So as a teacher on Riker’s Island, what I was overwhelmed with was the potential that so many of these young people I worked with really possessed,” Lexton explained.

She is also concerned with one specific part of the state’s criminal justice system.

“New York is one of only two states that prosecutes 16- and 17-year-olds as adults,” Lexton said. North Carolina is the other.

For several years, there have been efforts to change the current policy.

Studies show that kids under the age of 18 who were transferred to adult prisons have approximately 34 percent more rearrests for felony crimes than youth retained in the youth justice system.

Additionally, a 2013 study commissioned by the National Campaign to Reform State Juvenile Justice Systems showed "some 80% of juveniles released from adult facilities will re-offend, and they are likely to re-offend more quickly and with more serious crimes" than their counterparts housed in juvenile facilities.

Even Governor Andrew Cuomo has spoken out in support of policy reform, saying in his 2014 State of the State address, "It's not right, it's not fair . We must raise the age."

So turn help turn the potential she saw in those kids into reality, Lexton found an organization called Drive Change.

It’s the umbrella non-profit organization that oversees Snowday and the re-entry programs it offers.

“Every employee is referred to me,” Lexton explained. “They then go through an application process and interview before we hire them.”

Right now, Drive Change and Snowday has eight employees but aims for about 40 each year moving forward.

By the fall, the goal is to have a fully-functioning eight-month re-entry program in tandem with the food truck.

Lexton also hopes to have some employees continue with the program as mentors to future employees.

But these young people aren’t just learning how to make meals, they’re learning to make a new future.

“We teach transferable skills, and social media, marketing, money management, hospitality,” Lexton described. “Then we teach the actual application of the roles and responsibilities on the truck.”

“I love to cook,” Jaquial said. “Sometimes I cook on the grill, I do the takeout window, I take orders, I do a lot of prep work in the kitchen.”

It’s not just about cooking though, it’s how it makes him feel. I’m more relaxed, I’m free, any troubles you had before you don’t have.”

Each employee gets paid $11/hour and the money raised by the truck or organization will be recycled back, creating a self-sustaining system.

And it seems customers not only love the food, but truly appreciate the message the truck is spreading.

“I really like that they have a social mission,” Lisa said. “I spoke with the founder earlier. Just really excited about their mission,” Adam added.

“We’re transparent about what we’re doing,” Lexton explained. “We believe that by having this really positive interaction at our truck , we might actually help to dispel some of the preconceived notions that people have about what is means to be formerly incarcerated.”

On Tuesday, June 17th, Drive Change is holding a fundraiser to help fuel their program.

“Our hope is for them to be successful,” Rory said. “[And] for us to replicate this model possibly and have these trucks in every city in America.”

“When you were having the dark days in jail, did you ever think you’d be here?” I asked Jaquial. “No.”